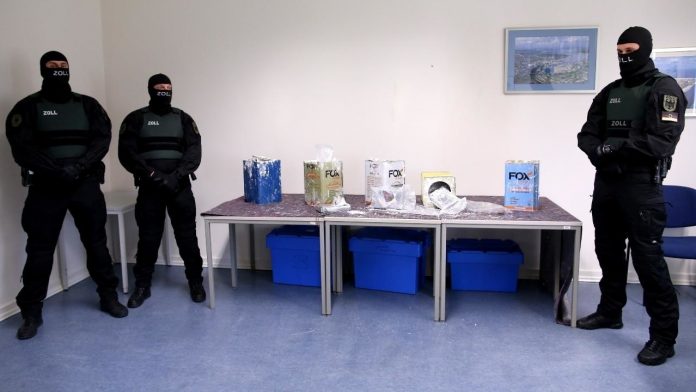 Investigators have seized 23 tonnes of cocaine in a record collection of the drug in Europe, with a street value of billions of euros, German customs said on Wednesday.

The 28-year-old owner of an import company in Rotterdam was arrested early on Wednesday in the Netherlands for the illegal cargo, when the Dutch police searched for two premises – one in the port city and another in a nearby village.

The intercepted drugs were all tied to “the same destination in the Netherlands”, Dutch police said.

“The seized mega-transports to the Netherlands together constitute an absolute record. Never before has so much cocaine been caught at once, they say in a statement.

German officers had first discovered 16 tons of cocaine hidden in containers from Paraguay in the port of Hamburg on February 12, following a tip from a company based in the Netherlands.

Joint investigations into the stash led to the authorities sweeping up another 7.2 tonnes of cocaine in the port of Antwerp in Belgium, the German customs said.

Stash in Belgium was hidden in a container full of wooden blocks, investigators said.

“The find is among the top five in the world,” Hamburg customs director Rene Matschke told AFP.

Customs officials at the bustling port of Hamburg took a closer look at the Paraguayan containers when they noticed “clear irregularities” with their contents – cans that were meant to be filled with putty.

When they ordered unloaded containers, they found that “beyond a warehouse of genuine goods packed right behind the container door, many cans were actually filled with other goods.”

A total of 102 tonnes of cocaine were seized from the European continent last year by an international law enforcement project carried out jointly by the UN.

The bulk of the cargo arrived at Europe’s second largest port Antwerp, where a record of 65.5 tonnes full-time was seized in 2020.

The drugs come from Latin America – mainly Colombia, Brazil and Ecuador – and are usually hidden in cargo containers loaded from ships.