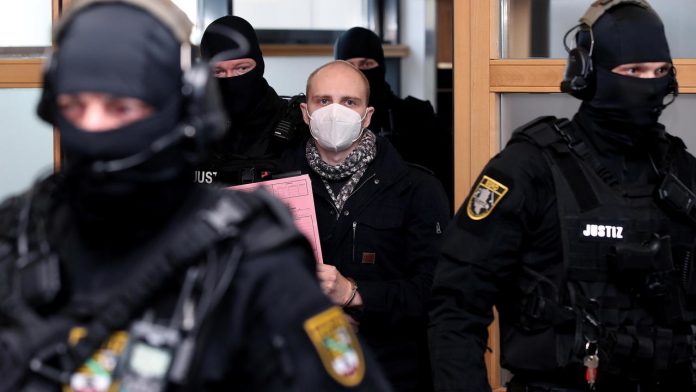 A German court on Monday sentenced the attacker to life in prison for a deadly right-wing attack last year that nearly became the country’s worst anti-Semitic atrocity since World War II.

A bolt door at the synagogue in the eastern city of Halle with 52 worshipers inside marking Yom Kippur, the holiest day of the Jewish year, was the only thing stopping the heavily armed attacker from carrying out a planned massacre.

After failing to storm the temple on October 9, 2019, Stephan Balliet, 28, shot a female passerby and a man to death in a kebab shop.

During his five-month trial, Balliet denied the Holocaust in open court – a crime in Germany – and expressed no remorse for those targeted, many of whom were co-defendants in the case.

“The attack on the Halle synagogue was one of the most heinous acts of anti-Semitic acts since World War II,” prosecutor Kai Lohse told a court in the nearby town of Magdeburg when the trial ended.

The prosecutor had demanded a life sentence for Balliet. The Defense Forces only asked President Ursula Mertens for a “fair punishment”.

A lawyer for nine of the appellants, Mark Lupschitz, told AFP early Monday that the trial had been “fair” and called the procedure both “stressful and empowering” for the intended victims.

During the trial, Balliet insisted that “attacking the synagogue was not a mistake, they are my enemies.”

Dressed in military uniform, he filmed the attack and broadcast it on the Internet, presenting it with a manifesto advocating his misogynistic, neo-fascist ideology.

“If that guy could have entered a synagogue … it would have had a huge impact on German identity after the war and the fight against anti-Semitism,” he told AFP in an interview.