Home NEWS German neo-Nazis were sentenced to life for the murder of the CDU...
Facebook
Twitter
WhatsApp
Linkedin
LINE 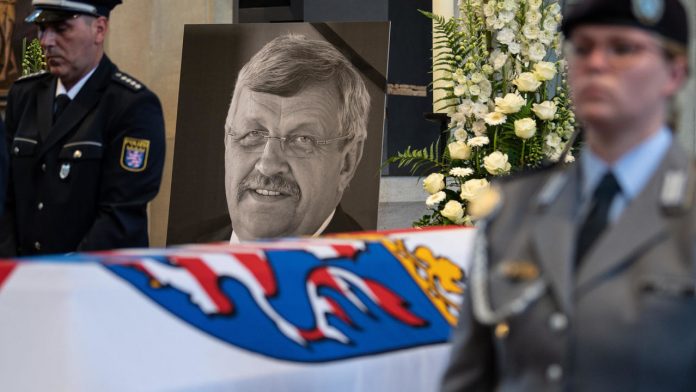 A German neo-Nazi was sentenced on Thursday to life in prison for murdering pro-migration politician Walter Luebcke, a murder that shocked the country and stressed the growing threat of right-wing extremism.

Stephan Ernst, 47, was found guilty of shooting the legislator from Angela Merkel’s conservative CDU party to death on June 1, 2019 in what is believed to be Germany’s first far – right political assassination since World War II.

Luebcke was found on the terrace of his home near the central city of Kassel, with an autopsy showing that he had been shot in the head at close range.

Judge Sagebiel said there was “no room for maneuver in the murder field … and in the assessment of criminality”.

He turned to the Luebcke family and added: “We know that we can hardly measure your loss and that the proceedings were very painful for you. Our task was to carry out a fair trial and … we have strived to do so.”

A co-defendant, Markus Hartmann, was cleared of being an accessory in the murder but found himself guilty of weapons possession and was sentenced to 1.5 years.

The summary of his case in December, the prosecutor said that Ernst had been motivated by “racism and xenophobia”.

Luebcke, 65, led Kassel’s regional council in the state of Hesse. He supported Merkel’s decision in 2015 to open the country’s borders to refugees and spoke in favor of receiving asylum seekers in a local city.

Prosecutors said Ernst had participated in a speech by Luebcke in October 2015 when politicians defended helping refugees, adding that anyone who disagreed with these values ​​was “free to leave the country.”

After the speech, Ernst “projected more and more of his hatred of foreigners” to Luebcke, prosecutors said at the start of the trial in June.

After mass sexual assaults on migrants against women in Cologne on New Year’s Eve 2015 and an Islamist attack in 2016 in the French city of Nice, Ernst began to trace Luebcke’s movements.

Between 2016 and 2018, prosecutors said he worked with Hartmann to improve his skill with firearms.

During his investigations, prosecutor Ernst separately charged with attempted murder for allegedly stabbing an Iraqi asylum seeker in the back in 2016.

They also uncovered weapons and ammunition belonging to Ernst, including revolvers, pistols and a machine gun.

Although Ernst initially admitted to killing Luebcke, he later withdrew his confession, saying Hartmann had pulled the trigger.

But he then fired his defense attorney and returned to his original confession, claiming he had been driven to blame Hartmann.

Ernst has a long criminal history and was known to the police as a neo-Nazi sympathizer.

He was convicted of attempted bombing of an asylum in 1993. German media say he took part in neo – Nazi clashes against a union demonstration in 2009.

But Ernst then dropped the radar of the security service and gave rise to criticism that the authorities did not take the right-wing threat seriously enough.

German police arrived several years earlier for ignoring racist crimes after it was revealed that a neo – Nazi terrorist cell, the National Socialist Underground, had killed 10 people, mostly immigrants, between 2000 and 2007.

In October 2019, just a few months after Luebcke’s death, Germany was shaken by a shooting at a synagogue in the eastern city of Halle that left two people dead.

Neo-Nazi Stephan Balliet, 28, was sentenced to life in prison in December for that attack, described as the country’s worst anti-Semitic atrocity since World War II.

In February last year, another shooter shot dead nine people of migrant origin in the central city of Hanau.

He has promised tougher security measures, including cracking down on hate speech online.