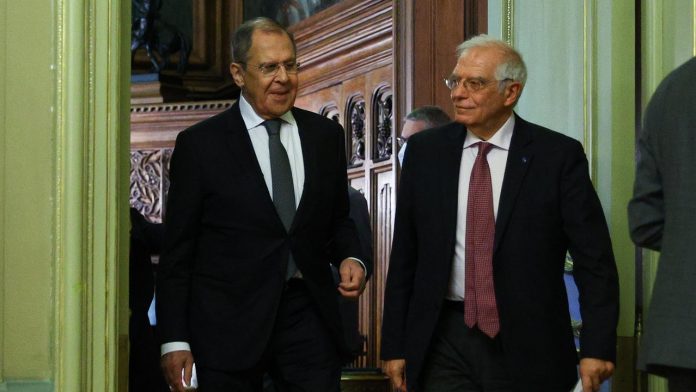 On Monday, Germany, Sweden and Poland each fired a Russian diplomat in retaliation for Moscow’s expulsion last week of its diplomats for allegedly participating in protests in support of Kremlin critic Alexei Navalny.

The three EU countries announced the tit-for-tat movements in coordinated statements and drew an angry response from Russia, accusing them of interfering in its internal affairs.

The diplomatic spit comes at a time of heightened tensions between the European Union and Russia, exacerbated by the arrest and imprisonment of leading opposition staff Navalny.

Russia humiliated the European Union on Friday by announcing the deportations during a rare meeting in Moscow between EU foreign policy chief Josep Borrell and Russian Foreign Minister Sergei Lavrov.

The European governments strongly condemned the deportations of shock and Berlin warned that it would respond in kind.

Moscow’s decision to expel the three diplomats “was in no way justified,” the German Foreign Ministry said Monday, adding that the German employee had done his job to “observe developments in Russia by legal means”.

We have informed the Russian ambassador that a person from the Russian embassy is asked to leave Sweden. This is a clear response to the unacceptable decision to expel a Swedish diplomat who had only previously performed his duties.

Sweden’s Foreign Minister Ann Linde said that Stockholm had “informed the Russian ambassador that a person from the Russian embassy had been asked to leave Sweden”.

“This is a clear response to the unacceptable decision to expel a Swedish diplomat who only performed his duties,” she wrote on Twitter.

The Polish Foreign Ministry also condemned the “unfounded deportation” of a Polish diplomat from St. Petersburg, saying it had declared “persona non grata” as a Russian consul in Poznan, western Poland.

“Today’s decisions by Poland, Germany and Sweden are unfounded, unfriendly and a continuation of the series of measures that the West is taking with regard to our country and which we describe as interfering in our internal affairs,” said spokeswoman Maria Zakharova State Channel Rossiya 1.

Earlier on Monday, the Kremlin defended the expulsion of EU diplomats during Borrell’s high-profile visit, insisting it remains interested in reviving relations with Brussels.

Kremlin spokesman Dmitry Peskov said the three foreign diplomats’ declaration as personae non gratae was a “result of certain diplomatic missions in Moscow in the wake of illegal riots.”

Peskov added that Moscow did not initiate the “collapse” of relations with the EU.

“Russia has been and still is interested in reviving relations between Moscow and Brussels,” he told reporters.

Navalny, a fierce critic of President Vladimir Putin, was arrested on arrival in Moscow on January 17 after spending several months in Germany and recovering from a poisoning attack that the West believes was ordered by the Kremlin.

He was imprisoned for almost three years last week for violating the condition when he was in Germany.

Tens of thousands of Russians have taken to the streets in recent weeks to protest Putin’s 20-year rule and demand the release of Navalny, triggering a crackdown on protesters.

Western leaders have also demanded the immediate release of Navalny.

Russia has brushed off international support for Navalny, accusing Europe and the United States of interfering in its internal affairs.

EU Borrell is expected to meet with foreign ministers from the 27 member states on February 22 to discuss new sanctions against Moscow that would require a unanimous vote among EU members.