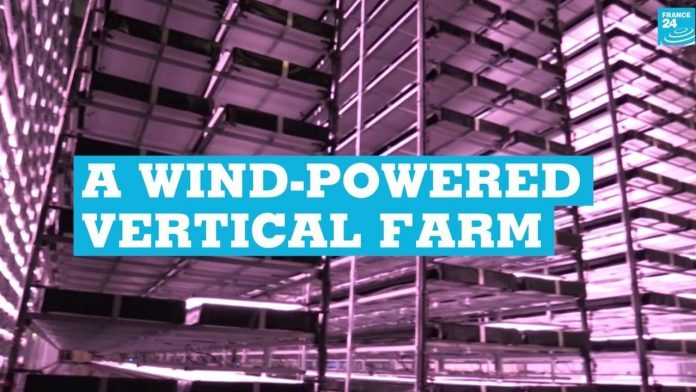 Inside a warehouse in an industrial area in Copenhagen, large stacks of plants float almost to the roof. In time, this newly opened vertical farm will be one of the largest in Europe, while power from Denmark’s wind turbines will ensure that it is carbon neutral, according to the company behind it.

Although they will never see daylight or soil, hundreds of tonnes of lettuce, herbs and kale will be harvested in the coming months from the large farm, which is run by the Danish start-up Nordic Harvest.

The futuristic yard uses 20,000 specialized LEDs to supply the plants with light, while robots deliver seeds trays from time to time over the 7,000 square meter hangar.

Vertical farming, where plants are grown in racks to maximize space, has been tried as a way to use urban space to meet the world’s growing food needs and produce food locally.

But vertical courtyards indoors have been criticized for the large amount of electricity needed to provide artificial light.

Nordic Harvest says, however, that the plant is powered entirely by renewable energy from Denmark’s extensive wind farms, which produce about 40 percent of the country’s electricity.

“A vertical farm is characterized by not harming the environment by recycling all water and nutrients or fertilizers and in our case we use 100 percent energy from windmills, which makes us CO2-neutral,” says Riemann.

“Our vision is that it can actually be done: Take some of the food production back to the cities where you can grow in a much smaller country and space optimized in height.”