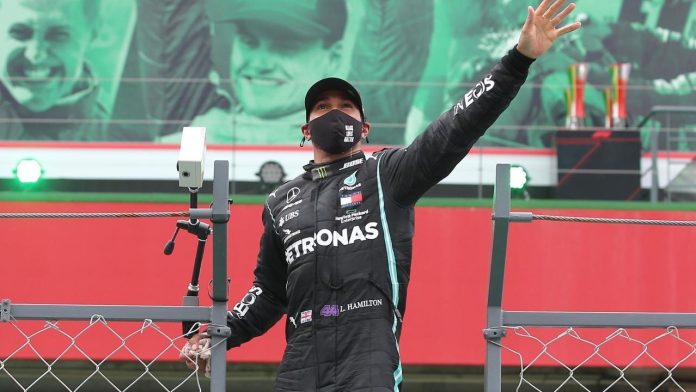 Lewis Hamilton became Formula One’s record winner over Sunday as he claimed his 92nd victory at the Portuguese Grand Prix to pass Michael Schumacher at the top of the list.

His victory lifted him a clear of Schumacher’s 14-year record of 91 triumphs after an exciting preliminary F1 race at the Algarve International Circuit.

After a long hug with his father Anthony, who along with stepmother Linda had witnessed his historic achievement, Hamilton greeted praise on his Mercedes before joining his racing engineer Peter ‘Bono’ Bonnington and Bottas on the podium.

“I owe this and so much to all these guys here and the team at the factory,” Hamilton said.

“For their tremendous work, they always push the barrier higher and higher. It’s a privilege to work with them … Working with them is inspiring.”

Hamilton fought back after an early scare as he led, but fell to third after a rainstorm, to demonstrate impeccable tire control and flawless judgment as he claimed an eighth victory in 12 races this year.

Hamilton’s triumph added yet another unprecedented feat to his list of records. He now has the most wins, a record 97 pole positions, a record 161 podium finishes and a record 45 consecutive point finishes.

The 35-year-old Briton extended his lead over Bottas to 77 points.

A seventh world championship that would equate to yet another Schumacher record now looks almost inevitable with just five races left this year.

The 35-year-old Hamilton said the race had been “hard” and that he had some cramps.

“Yeah, it’s a very physical sport, and I had it in my right calf. I was lifting down straight stretches, and it was painful.”

Charles Leclerc was fourth for Ferrari ahead of a surging Pierre Gasly after an excellent drive in his Alpha Tauri.

Carlos Sainz came home sixth for McLaren to beat Sergio Perez, who recovered from a first-half clash with Verstappen, to finish seventh for Racing Point ahead of two Renaults Esteban Ocon and Daniel Ricciardo.

On a cool, airy day with light rain, an estimated 27,500 crowds were scattered around the new 90,000-capacity circuit hosting the first Portuguese Grand Prix since 1996, when riders completed the pre-race ceremony, including an anti-racism greeting led by Hamilton in a Black Lives Matter t-shirt that took a knee.

Initially, Hamilton led away from his record 97th pole, while Verstappen from third passed Bottas before the Finn bent back to pass him and his teammate to take the initiative.

As mild rain fell, Hamilton slipped while Sainz, on softs, found grip to take the lead and avoided a Verstappen-Perez collision that sent the Racing Point car around. In short, it was wild stuff.

Under the “skating rink” -like conditions, the Mercedes men in the media needed time to warm up their tires before catching and passing Sainz on six and seven laps, respectively.

At eight innings, Bottas Hamilton led by 1.8 seconds and Verstappen, third by four.

Despite the scary conditions was normal service, it seemed to resume.

Raikkonen was in his record-breaking 324th run first to pitch from softs to medium, which got a series of stops as the grip diminished.

“The left front is dead, comrade,” Verstappen reported, before Hamilton repeated this sentiment within two innings.

Almost immediately, he set a fastest lap, and by lap 20, he had closed on Bottas and passed him with a bust of DRS on straight. Verstappen pitted and reunited sixth as Hamilton pulled free.

All of this left Hamilton, who led his teammate by 7.3 seconds on lap 30 with Leclerc third, running by 27 seconds.

Hamilton pitted after 40 laps, took hard and sat behind Bottas, who led again. The Finn suggested switching to softs, but when he came in, Mercedes gave him the white-walled hards.

For the Englishman, who had recovered from the early dramas, it was almost a Sunday walk in the park.

He led by 12 seconds with 21 laps to go, with little more than light rain threatening his progress on another record-breaking day.