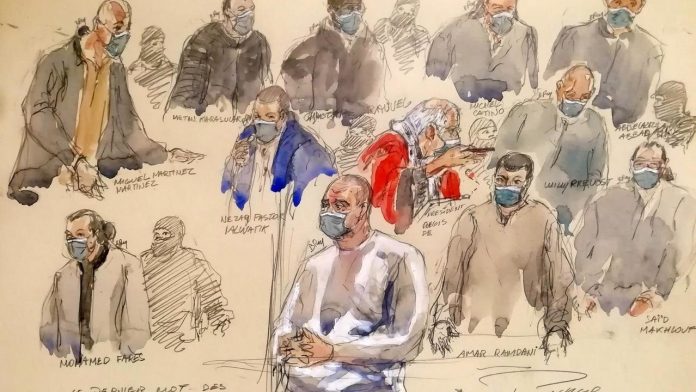 A French court on Wednesday found 14 accomplices of the French Islamist militants behind the jihadist attacks in January 2015 on the satirical newspaper Charlie Hebdo and a Jewish supermarket in Paris.

Among the 14 were Hayat Boumeddiene, a former partner of Amedy Coulibaly who murdered a policewoman and, a day later, four French Jews during the siege of a kosher supermarket in eastern Paris.

Boumeddiene was found guilty of financing terrorism and belonging to a criminal terrorist network. She is believed to be alive and on the run from an international arrest warrant in Syria, where she joined the Islamic State.

Another of the three aides set up in absentia, Ali Riza Polat, a 35-year-old Franco-Turkish friend of Coulibalys, whom prosecutors described as his “right hand man”, was also sentenced to 30 years in prison. Other sentences ranged from four years.

Coulibaly himself was an accomplice to the gunmen behind the brutal massacre that killed 12 people at the satirical newspaper Charlie Hebdo in Paris in January 2015.

The accomplices were guilty of various charges, ranging from membership in a criminal network to complicity in the attacks.

The attack in January 2015 marked the emergence of a wave of Islamist violence in which more than 250 people have been killed.

The trial comes when France was shaken by the beheading of teacher Samuel Paty on October 16 by a Chechen Islamist militant who is dissatisfied with the display of cartoons of the Prophet Mohammed in a class on freedom of speech. Paty showed these pictures to his community class while emphasizing that students could choose not to look at them if they were offended.

On October 29, an assailant with a knife killed three people worshiping in a church in Nice and tore two in the neck. A Tunisian man who arrived in France last month was charged with murder.

In response to Paty’s assassination, President Emmanuel Macron promised that France would never give up the values ​​of the Enlightenment as the right to be blasphemed. He hailed the slain teacher as a “hero” for representing the secular, free-thinking values ​​of the French Republic.

France has a long tradition of caricatures that take on political and religious authorities – including Charlie Hebdo’s fierce mockery of Catholicism.

On December 9, Prime Minister Jean Castex announced a new bill to address the root causes of terrorism. He stressed that the text is not aimed at religious freedom but focuses on “the malicious ideology of radical Islamism”.

Castex described the proposed bill as “a law on freedom, protection and liberation from religious fundamentalism”.

The proposed legislation would make it easier to prevent mosques from obtaining foreign funding, and would also offer protection to moderate leaders who are in danger of being overthrown by an extremist “coup”.

The bill also proposes stricter criteria for allowing homeschooling for children over the age of three to prevent parents from taking their children out of public schools and enrolling them in underground Islamist structures.

“With what has happened in France in recent years and in recent times, the government just can not sit back and let this happen; it must take some radical measures to prevent this from continuing and worsening, says JowharInternational Affairs Editor Philip Turle.