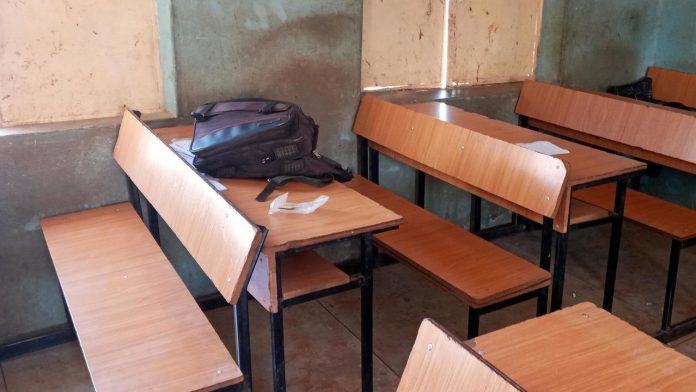 Armed men have looted a high school in northern Nigeria in the state of Katsina, police said on Saturday in a blatant attempted kidnapping. Local residents told AFP that several students were caught.

President Muhammadu Buhari condemned the attack in a statement on Saturday and ordered security reinforcements in other schools.

“The bandits came on motorcycles that fired sporadically and tried to enter the school,” said State Police spokesman Isa Gambo. “Our men, with the help of the army, engaged them in a shooting game that lasted an hour and a half.”

The shooters were forced to withdraw and were tracked down, but the spokesman did not mention any deaths. “We are still taking the call to determine if any students are missing,” he told AFP.

Reinforcements had been used to search for missing students.

“This morning, 200 students who fled for safety during the attack have returned to the hostel,” he added.

Police said an inspector was injured and received treatment.

Local residents said several students were abducted by the attackers, who were divided into two groups.

The kidnappers fought with security personnel. “During the fighting, another group went into the school and removed several students,” Nura Abdullahi told AFP.

“Some of the students who fled returned to the city this morning but others took a bus home,” he said. “The school is abandoned. All students have left.”

Another resident, Ibrahim Mamman, added that most of the students had escaped, “but some were captured and taken away by the bandits”.

“No one can say how many students were abducted because there have not been a number of people,” he said.

Local media reported that many students may have been abducted.

On Saturday, Buhari called on security forces to arrest the men.

“I strongly condemn the cowardly bandits’ attack on innocent children at the Science School, Kankara. Our prayers are for the families of the students, the school authorities and the injured,” he said.

Katsina, Buhari’s home state, is among several in northwestern Nigeria who have been repeatedly attacked by “bandits” who kidnap for ransom and rattling cattle.

In August, seven students were abducted along with their female teacher from a private high school in nearby Kaduna.

The hostages were later released, but it was not revealed if a ransom was paid.