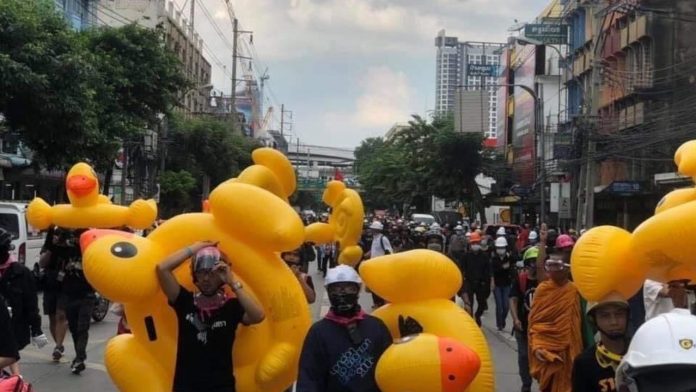 On November 17, Thai democracy protesters against royal protesters and police met in violent clashes near the country’s river parliament in Bangkok. Fifty-five people were injured in the clashes. A strange addition to the protest were large, inflatable rubber ducks used by protesters as security shields when police bombed them with water cannons and tear gas.

Since July, a youth-led protest movement for democratic reform by the Thai government and monarchy has mobilized tens of thousands of people across the country.

A series of photos posted on Twitter on November 17. The caption reads: “Good job, duck. Thanks. You are really helpful to us ”.

The November 17 protests took place near the Thai parliament, which was blocked by concrete blocks and a razor while lawmakers discussed seven bills to reform the constitution.

In the midst of the escalating violence between the various parties, the ducks appeared.

“Crystal”, a Democracy Demonstrator in Bangkok who demanded anonymity, said the rubber ducks were originally designed to mock the military-backed government.

As the parliament is located on the Chao Phraya River, protesters said they would gather and ride the rubber ducks to the pier as an insult to the government – not that they would actually go ducking. [Editor’s note: the Parliament was otherwise inaccessible due to the barricades.]

But when the water cannon was taken to the scene, rubber ducks became the protesters’ shields to protect themselves from the water and tear gas.

A Twitter video from November 17 shows democratically protesters, equipped with helmets and goggles, and swinging rubber ducks, coughing after being hit by tear gas. The caption reads: “The sound of the protesters coughing from a sore throat, stinging nostrils and tear gas was clear. The protesters only had rubber ducks without weapons. But the police took measures that were too extreme. ”

The Democratic protests also used the ducks as shields when a violent collision broke out with royal protesters in yellow shirts, the first of its kind during the ongoing protests.

A Twitter video released the same day shows royal protesters throwing water bottles and other small objects at Democratic protesters, who use a rubber duck to block flying debris.

In a more zoomed-out video of the scene published by Thai journalist Pravit Rojanaphruk, Rojanaphruk says that “they tell people to stop, they say we are all Thais, but some still throw water bottles and bricks. Both sides are still throwing things away ”.

Among the 55 people injured during the protest, doctors said six people were shot, although it is not clear who was responsible for the shooting. Police denied using live rounds or rubber bullets during their operation.

After fulfilling its duty to protect protesters yesterday, the ducks have emerged in a new day of protests as another symbol of Thailand’s pro-democracy movement.

Twitter photos published on November 18 show that the ducks are in large numbers and protesters are holding duck signs with the text “Salute Yellow Ducks”.

A Twitter video published the same day shows the ducks being lifted into the air amid cheers from protesters.

The Thai Parliament will vote on 18 November on which constitutional amendments will be discussed further. The most popular proposal among the Democratic protesters, presented by the Thai NGO iLaw, would replace military-appointed senators with elected officials and allow changes to be made to constitutional articles on the monarchy.

The main demands of the demonstrators are the resignation of Prime Minister Prayuth Chan-ocha (a former military leader who took power in a coup in 2014 and was elected in the disputed 2019 general election), greater scrutiny of and restrictions on the monarchy and democratic review of the current constitution. None of the other six proposals contains provisions for monarchical reform.

As the vote continues, CNN reported that almost all senators and coalition party members have either abstained or rejected the iLaw proposed bill.