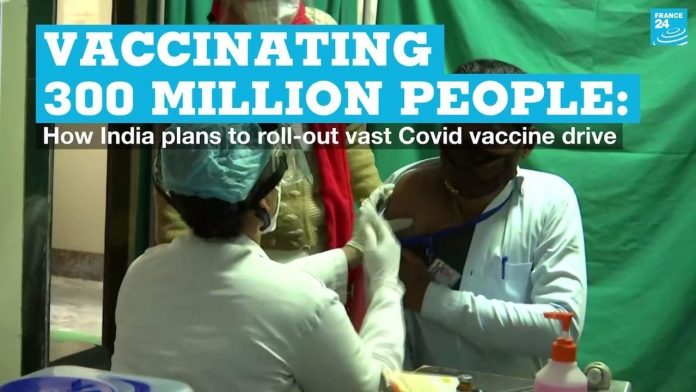 This week, India granted approval for the emergency use of two Covid-19 vaccines, starting what may be the largest and most ambitious vaccination in history in a country with a population of 1.35 billion.

India has approved two vaccines: AstraZeneca and Oxford University vaccine, known in the country as Covishield, and a locally developed one, called Covaxin.

It aims to vaccinate about 300 million of its citizens in August, starting with health workers and people over 50 years.

“The scale is huge, of course – there are 600 million doses across 36 states,” Dr Rajib Dasgupta, a professor of public health at Jawaharlal Nehru University, told AFP.

To prepare for the launch, the country has launched a comprehensive training program with more than 100,000 workers who learn how to administer vaccines and help with logistics and administration.

It has also conducted a nationwide vaccination exercise with health workers who have received dummy vaccines in hundreds of places across the country.

Despite the scale of the task, India has some advantages. The Serum Institute, the world’s largest vaccine manufacturer, produces the AstraZeneca vaccine locally and has already stored 50 million doses, ready to be distributed to vaccination centers.

The country also has experience of major vaccination programs, with its universal immunization program inoculating approximately 55 million people per year against various diseases.

But concerns have been raised by the government’s urgency to approve the locally produced Covaxin.

Full efficacy data for the vaccine have not yet been published with Phase III studies still being conducted, and some opposition politicians and health experts have questioned whether the vaccine can be considered safe without further data.