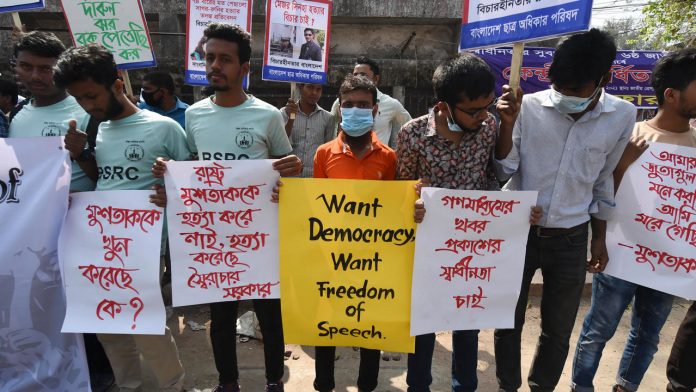 On Saturday, Bangladesh’s Prime Minister Sheikh Hasina shrugged off criticism of her government’s rights record as hundreds marched during a second day of protests over the death of a prominent author in prison.

Protesters marched on Dhaka University chanting slogans condemning the government’s treatment of Mushtaq Ahmed as well as other writers, journalists and activists.

Another protest was held at the National Press Club, while dozens of people carried a symbolic coffin around Dhaka University and demanded the scrapping of the Digital Security Act (DSA) under which Ahmed was arrested in May last year.

The comprehensive DSA has been used to address disagreements since its adoption in 2018.

The protests followed clashes with police and security forces in the capital on Friday night. Police said six people were arrested while activists said at least 30 were injured. More protests against death and arrests were planned on Sunday.

On Saturday at a rare press conference to mark a UN recommendation that Bangladesh be reclassified as a “developing” economy, Prime Minister Hasina – who has been in office for 12 years – lost international concern over the law and Ahmed’s death.

“What can we do if someone dies after becoming ill,” she said. “No death is desired. Nor is it desirable for anxiety to be created.”

“Whether the law has been abused or not depends on your opinion. I believe the law will take its own path and will do so. If anyone does not commit a crime, he will not be punished in a trial,” the minister added.

Ahmed collapsed and died in the Kashimpur High Security Prison late on Thursday.

The 53-year-old, a crocodile farmer and author known for his satirical style, was accused of spreading rumors and carrying out “anti-state activities” after criticizing the government’s handling of the coronavirus pandemic on Facebook.

Protesters have said his death was a “murder” after he was denied bail six times in ten months.

Authorities say they have ordered a committee to investigate whether there was negligence on the part of prison officials.

But ambassadors from 13 countries, including the United States, France, Britain, Canada and Germany, have expressed “serious concern” over the matter.

“We call on the Bangladeshi government to conduct a swift, transparent and independent inquiry into the full circumstances of Mushtaq Ahmed’s death,” the envoy said in a statement released late Friday.

They said their countries would seek “broader concern about the rules and implementation of the DSA, as well as issues of its compliance with Bangladesh’s obligations under international human rights law and standards.”

Rights groups have also raised concerns about the case and the detention of Kabir Kishore, a cartoonist who was arrested at the same time as Ahmed.

PEN America said authorities should drop charges against Kishore, while the U.S.-based Committee on the Protection of Journalists said he had sent a note to his brother during a hearing this week that he had been subjected to serious physical abuse in custody.