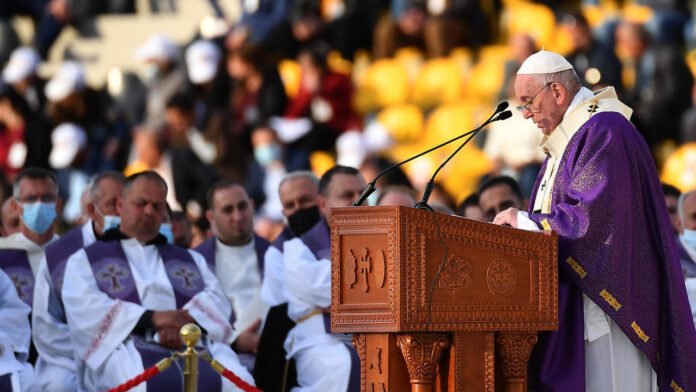 Pope Francis held the largest mass of his historic Iraq trip on Sunday after visiting war-torn cities to comfort Christian survivors of the Islamic State group’s period of terror.

The pope was greeted by thousands at a sports arena in the Kurdistan capital Erbil who had gathered despite fears that the event could become a “super-spreader” in Covid-19.

The 84-year-old was driven in his white, windowless “pope’s mobile” into the arena, where jubilant worshipers sat socially distanced on white chairs scattered on the greens.

Others stood and craned their necks to catch a glimpse of Francis in the stands calling Franso Hariri Stadium, named after an Iraqi Christian politician who was assassinated by extremists 20 years ago.

Believers wore hats with images of Francis and face masks to protect them from Covid, as a second wave has propelled cases to about 5,000 new infections a day in Iraq.

The stadium has about 20,000 seats, but large parts of the stands were empty after the authorities had trimmed down the permitted presence in recent days.

“It is a special journey, also because of the conditions,” said Matteo Bruni, a Vatican spokesman, who described the visit to Iraq as “a gesture of love for this country and its people.”

Erbil has been a haven for many Christians who fled violence over the years, including the 2014 attack by the Islamic State group.

The heaviest deployment of security personnel to date is to protect Francis in northern Iraq, on perhaps the most risky day of his historic trip.

The city was targeted just a few weeks ago by a deadly rocket attack, the latest in a series of attacks accused of pro-Iranian forces.

‘The most beautiful day’

The visit to the north embodies one thing that lies at the heart of the pope: reaching out to Iraq’s traumatized Christian communities.

When he saw far from 2014 when IS swept over the northern province of Nineveh, Pope Francis said at the time that he was ready to come and meet the displaced and other war victims in a show of solidarity.

He fulfilled this promise on Sunday and first visited Mosul, the Islamic State group’s one-time bastion, which is still largely in ruins.

With the partially collapsed walls of the 100-year-old Al-Tahera Church (Immaculate Conception) behind him, Francis asked Christians in Iraq and the Middle East to stay in their homelands.

He said that the “tragic” emigration of Christians “harms not only the individuals and communities concerned but also the society they leave behind”.

Francis spoke to believers in the courtyard of Al-Tahera Church, whose roof collapsed during the fighting against IS 2017. It is one of the oldest of at least 14 churches in the province of Nineveh that was destroyed by the jihadists.

The pope was driven around the historic old town – largely leveled during the grinding struggle to get rid of the jihadists – in a golf cart.

“Today was the most beautiful day for us, who were visited by the Pope!” said Hala Raad, a Christian woman who had fled when IS seized Mosul but returned to see the pope.

“We hope to return to Mosul in health and well-being. The most important thing is security – we want stability.”

The pope also held a prayer service in Qaraqosh, whose ancient church – called Al-Tahera, like the one in Mosul – was burned by the jihadists when they destroyed most of the city.

Residents of Qaraqosh have since rebuilt their homes with little government assistance and Al-Tahera has also been renovated, its marble floors and internal colonades are buffered to host its most important guest to date.

Dressed in traditional embroidered robes, hundreds of believers – who speak a modern dialect of Aramaic, the language spoken by Jesus Christ – welcomed the pope with hymns and olive branches.

“Do not stop dreaming! Do not give up! Do not lose hope!” Francis urged those gathered. “Now is the time to rebuild and start over.”

Pope Francis’ trip to Iraq as a “pilgrimage of peace” aims to calm the country’s declining Christian community, but also to expand its dialogue with other religions.

On Saturday, the leader of the world’s 1.3 billion Catholics met Iraq’s chief Shiite Muslim priest, the retrospective Ayatollah Ali Sistani, who agreed that Iraqi Christians could live in “peace.”

The pope’s program in Iraq includes visits to the cities of Baghdad, Najaf, Ur, Mosul, Qaraqosh and Erbil. He will cross about 1445 km in a country where tensions are still lingering and where more recently the Covid-19 plagues have led to a record number of infections. Pope Francis will travel in an armored car through the usual crowds that flock to catch a glimpse of the leader of the Catholic Church. Sometimes he will have to travel by helicopter or plane over areas where jihadists belonging to the Islamic State group are still present. The process began on Friday with a speech to Iraqi leaders in Baghdad, addressing the security and economic difficulties facing Iraq’s 40 million people. The pope also discusses the persecution of the country’s Christian minority. On Saturday, he hosted the holy city of Najaf by Grand Ayatollah Ali Sistani, the highest authority for many Shiites in Iraq and the world. The pope also made a trip to the ancient city of Ur, which according to the Bible is the birthplace of the Prophet Abraham, a common figure of the three monotheistic religions. There he prayed with Muslims, Yazidis and Sanari (a pre-Christian monotheistic religion). Francis continued his journey on Sunday in the northern Iraqi province of Nineveh, the cradle of Iraqi Christians, before heading to Mosul and Qaraqosh, two cities nearly destroyed by jihadists. The pope ends his tour with an outdoor mass on Sunday in the presence of thousands of Christians in Erbil, the capital of Iraq Kurdistan. This Kurdish Muslim stronghold has offered refuge to hundreds of thousands of Christians, Yazidis and Muslims who fled the atrocities of the Islamic State.