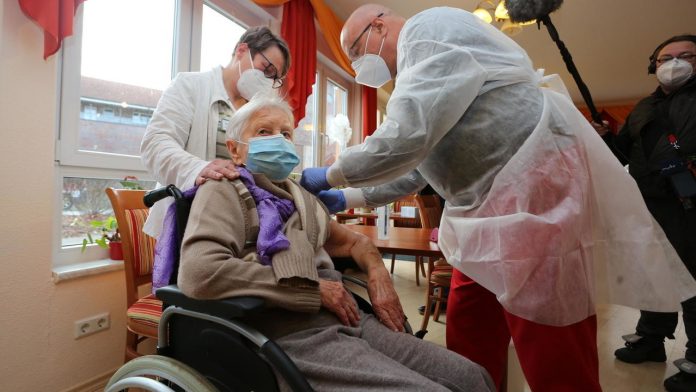 A 101-year-old woman became the first German to receive a coronavirus vaccine on Saturday, a day before the official start of the country’s vaccination campaign, the local TV broadcaster MDR reported.

The woman from Halberstadt in the Harz mountain range lives in a nursing home for the elderly, where 40 residents and 11 employees were vaccinated, MDR reported.

German Health Minister Jens Spahn said earlier on Saturday that trucks were on their way to deliver the vaccine to a nursing home, which is the first in line to receive the vaccine.

The federal government plans to distribute more than 1.3 million vaccine doses to local health authorities by the end of this year and about 700,000 per week from January.

“There may be some hiccups at some point in the beginning, but it is perfectly normal when such a logistically complex process begins,” said Spahn.

Germany, with a population of 83 million, has built more than 400 vaccination centers, including at places such as Berlin’s former Tegel and Tempelhof airports and Hamburg’s exhibition hall.

Vaccinations will be free and available to everyone from mid-2021, when priority groups are expected to have completed vaccination campaigns. There is no obligation to inoculate.

The number of confirmed Covid-19 cases in Germany increased by 14,455 to 1,627,103, according to data from the Robert Koch Institute for Infectious Diseases on Saturday. In total, more than 29,000 people have died.