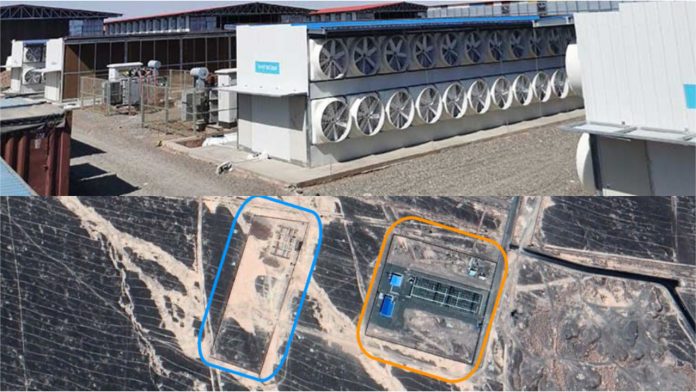 The Minister of Energy Reza Ardekanian admitted that these outages might have been caused by “bitcoin farms” consuming large amounts of power.

What he didn’t say, however, was that many of these farms, while located in Iran, are owned by Chinese companies trying to keep their presence a secret. In this investigation, the JowharObservers team tracked them down.

Earlier this year, several towns and cities across Iran were hit with a series of power outages. This photo was taken in Tehran on January 14.

“Here’s Tehran, the capital of a country with the richest natural resources on earth, and that is experiencing power outages. It comes and goes,” tweeted one social media user.

It turns out that bitcoin farms might be one of the main causes of these outages. If you aren’t familiar with the term, we’ll explain more about it in the next section.

An official from Kerman province said on January 8, 2021, that there was a bitcoin farm near the town of Rafsanjan that was consuming enormous amounts of energy. According to authorities, this farm is the largest legal operation of this type in Iran.

What’s bitcoin and why are so many so-called farms popping up in Iran?

Bitcoin is a virtual currency, the value of which is rising. Today, a single bitcoin is worth more than 27,000 euros.

“Farming” or “mining” bitcoin is a way to earn cryptocurrency without paying money for it. It’s a little complicated but, essentially, “farmers” are awarded bitcoin for verifying transactions in bitcoin. They are basically acting like auditors, verifying the legitimacy of transactions. The whole system is more complicated than that, but that’s the basic gist.

But here’s the thing about all this that is important for the purposes of this article: bitcoin farming requires a lot of energy. In fact, farming bitcoin on a large scale requires thousands of computers as well as cooling systems, which are grouped together in centers called “bitcoin farms.”

This means that bitcoin farms can make the most money in countries where electricity is produced in abundance and at a low cost, which is the case in Iran. For comparison, a kilowatt of electricity produced in Germany costs 0.15 euro, while it only costs 0.018 euros in Iran.

While Iranian officials claim they sell electricity 10 times more expensive than this price to the bitcoin farms, according to statements made by the Chinese companies operating in Iran, Iranian authorities sell them the electricity at a great rate: 0.022 euros (equivalent to 0.027 dollars) per kilowatt per hour.

Chinese bitcoin company RHY tries to remain discreet about its activities in Iran. In this document, it never mentions the country “Iran”, instead vaguely using the term “Middle East”, which it says is a “paradise” for bitcoin producers.
© Observers

Some Chinese companies have jumped at the opportunity and invested in bitcoin production in Iran. But they are now facing two problems: firstly, the numerous power outages and secondly, a growing anti-Chinese sentiment amongst the Iranian population.

Many Iranians see Beijing as the main international supporter of their country’s theocracy. In exchange for Beijing’s support, Iranian authorities are said to reward Chinese companies with lucrative contracts and special deals.

Iranian authorities have confirmed that there are at least 14 legal bitcoin farms operating in the country. Altogether, they consume around 300 megawatts of electricity per hour. That’s the same amount consumed by a town of 100,000 residents, at least, in the same time frame. They didn’t say how many of these farms are Chinese-owned.

However, the independent experts estimate the consumption near 450 megawatts of electricity per hour.

Mounting tension and the announcement of farm closures

In this context, it’s not surprising that people across Iran reacted with outrage when a video appeared online on January 11 showing a Chinese worker demonstrating the different steps needed to build a bitcoin farm in Iran.

Our team looked into the video and established that, even though it just started circulating online, it was actually filmed sometime during the second half of 2017 on the farm in Rafsanjan. The video was first shared by RHY, the company that runs that particular bitcoin farm.

In this video, a man explains in Madarin all the different steps to constructing a bitcoin farm. It was filmed at the bitcoin farm run by the RHY company in Rafsanjan in late 2017.

In Iran, Chinese trawlers are damaging marine ecosystems and the livelihood of local fishermen

On January 13, Iranian authorities tried to soothe the public by saying that this company had obtained all of the necessary authorisations, that it was operating in full legality and that it used a limited quantity of electricity.

However, according to RHY, the site consumes 175 megawatts per hour, which is roughly equivalent to what a city of 30,000 residents would consume. It is also roughly the amount consumed by one-fifth of the population of Rafsanjan, the nearest city.

The text on this photo published by RHY explains that the bitcoin farm uses 175 megawatts per hour.

The company posted an undated video of the site showing most of the construction finished and computers in the process of “mining” or producing bitcoins. Some parts of the farm are still unfinished.

In response to the outrage, officials in Kerman province announced that the RHY farm would stop its activities for two weeks in light of the power outages the country was experiencing. That’s what Mohammad Moetevallizadeh, the CEO of the national electricity company Tavanir, said on January 15.

The RHY farm is visible in these satellite images. It is located right next to a power stationan ideal location.

Judging from these images, it seems like the bitcoin farm was built in the second half of 2017. RHY’s website includes this photo showing the farm under construction. We converted the date written on the photo from the Iranian calendar to the Gregorian calendar: it says July 16, 2017.

The date, according to the Iranian calendar, is written on the piece of machinery.
© Observers

Other satellite images, taken between 2019 and January 2021 show other important developments in the site. Many of these steps were laid out by the man in the 2017 video who was explaining the phases of construction of a bitcoin farm.

This energy-devouring Chinese bitcoin farm isn’t the only one trying to hide its identity with the complicity of Iranian authorities. After it was revealed that this enormous bitcoin farm existed in Rafsanjan, several Iranian media outlets reported that there was another Chinese bitcoin farm in Jolfa in northwestern Iran. Afshin Milani, the regional director of national energy company Tavanir, denied this, saying on January 13 that there were no “bitcoin farms” in the area.

Documents that prove that these farms are run by Chinese citizens

However, the France 24 Observers team was able to obtain an official document registering the company “Zino Kian Aras” or “ZIKAS”— a bitcoin farm— in Jolfa in 2019. ​​​​

This document lists the names of investors and the director of Zikas— they are Chinese citizens.

We could find profiles of some of the ZIKAS workers even on LinkedIn.

However, there is no digital trace of this company. They don’t have a website or any online activity. The bitcoin farm doesn’t exist on Google Maps or any other map sites.

But the address on these documents proves that the farm does exist in the region. There is no information about the size of the farm or how much energy it consumes.

This building appeared in this field a few months after the company was registered under the name ZIKAS, a bitcoin farm, in 2019.
© Observers

During this investigation, the France 24 Observers team discovered that another bitcoin farm called Mana Pardazesh Asia is also operating in Maku in northwestern Iran.

This official licencing document, registered in December 2018, lists the names of the investors, who are all Chinese citizens. © Observers

This official licensing document, registered in December 2018, lists the names of the investors, who are all Chinese citizens. And, it turns out that a Chinese company built a power plant in the same area during the same period.

There was no additional information about this new farm, except the name of an Iranian citizen who was listed as an associate of these two farms in the northwest: Mahmoud Nosrati.

These Chinese entrepreneurs aren’t the only people who have benefitted over the past three years from Iranian officials’ willingness to hand over a quick license and permission to build a bitcoin farm.

Our team also identified a Turkish company in the business. This company has a website in Farsi and even wrote their name and logo on the roof of their bitcoin farm in the industrial Semnan zone.

Our team also identified a Turkish company in the business © Observers

According to official records, this bitcoin farm was created in April 2020 and consumes around 18 megawatts of electricity per hour, which is the amount typically consumed by 3,600 households.

Dariush is an Iranian businessman and an expert in new technology. He recently tried to start a bitcoin farm in Iran. He says that only Chinese investors or Iranian investors with close links to the government get permission to build these farms in Iran.

The first time that I heard about Chinese bitcoin investors in Iran when there was a wave of power outages in January 2020.

I’m really active in the field of new technology and even I hadn’t heard about this trend before. Before that, we had the idea that the only people who had bitcoin farms were Iranian investors who had close links with the government, who were actually commercial partners with the government or who were military. For example, I know of one farm running near Shiraz. They don’t even buy electricity from the government anymore. They have their own power plant!

It would be impossible for a regular person to have a bitcoin farm. You could try to register your licence, of course, but even if it is accepted then it is illegal to import the machines used to farm cryptocurrency. So only people who have the police, customs officers and even the Guardians of the Revolution in their pockets can import these machines on the black market and run their firm legally. In other words, ordinary Iranian citizens don’t have this luxury, but the Chinese do.

I tried to get a license for months but was never able to get it. The officials at the Ministry of Industry with whom I was in contact, “kindly” told me to forget this idea if I didn’t want to have issues with the Guardians of the Revolution.

So, like many other people, I decided to run an illegal operation. But these illegal bitcoin mines don’t produce a lot of bitcoins because the machines aren’t as powerful. They consume a lot of energy and produce limited results. In order to keep them hidden, they have to be small. The farms that consume the most energy belong to people who have connections to people in high places and get subsidized energy.

According to Tavanir, at least 1,100 illegal bitcoin farms were dismantled in Iran in 2020. Tavanir also promised a reward of 20 million tomans [770 euros] for anyone who would provide information on these installations.

According to some experts, Iran is the third largest producer of bitcoins in the world. Some experts believe that Iran is using bitcoin as an alternative to the dollar and a way to circumnavigate economic sanctions imposed by the United States.