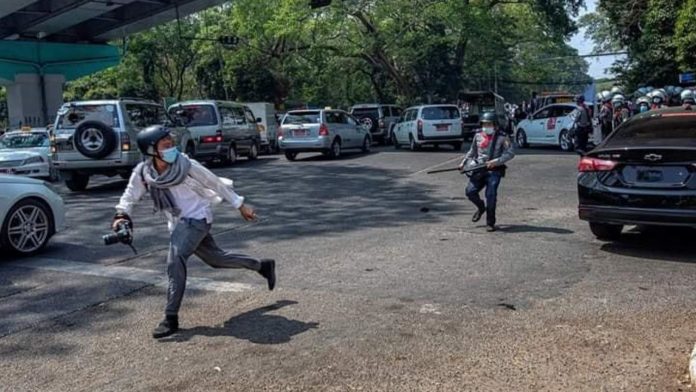 A live-streamed video of a Myanmar journalist being attacked and shot at in his home by military authorities on the night of March 1 has gone viral as Myanmar’s military junta violently fights anti-coup protesters in recent days with tear gas, live ammunition and mass arrests. Journalists in particular have been increasingly targeted by security forces – at least nine are currently in custody and at least 30 have been arrested since the anti-coup protests began a month ago.

‘If you shoot like this, how do I get down?’

After the curfew on March 1, reporter Kaung Myat Naing (a) Aung Kyaw from the Democratic Voice in Burma (DVB), an independent news organization in Myanmar, began a live stream on the media’s Facebook page as police surrounded his home in southern Myeik and fired him through his balcony. “Help me please, I was also injured in the head”, he shouts when shots are heard in the background (the type of bullet used is unknown). “If you shoot like this, how do I get down?”

Several hours later, DVB published a press release on Twitter stating that the police in Myanmar have arrested Kaung Myat Naing (a) Aung Kyaw and kept him in an undiscovered place. He had been reporting daily on the anti-military coup protests since early February, documenting the deadly military strikes on protesters in Myeik.

Kaung Myat Naing (a) Aung Kyaw is not the only journalist who has been attacked and arrested by security forces.

On February 26, a Twitter video showed Japanese freelance journalist Yuki Kitazumi arrested when police dispersed a protest in Yangon – the first foreign reporter to be imprisoned since the start of the military coup. He has since been released from police custody, the Japan Times reported.

A Japanese freelance journalist was arrested when police dispersed a protest in Yangon on Friday. The journalist was identified as Yuki Kitazumi, a former reporter for Tokyo-based Nikkei daily. Here is the video that recorded his arrest #WhatIsHappeningInMyanmar pic.twitter.com/XntHQcUCOC

On February 27, another Twitter video shows Associated Press journalist Thein Zaw arrested in Yangon. Authorities accused him and five other journalists of violating an agitation law against “causing fear among the public, deliberately spreading false news or directly or indirectly agitating a government employee,” the Associated Press reported. According to this accusation, the journalists could be imprisoned for up to three years.

Among the journalists accused and imprisoned was Myanmar Now journalist Kay Zon Nway, who captured the moments leading up to her arrest on Facebook Live. On February 27, during the last two minutes of a livestream video for the news agency, police chase the journalist just before the video is cut out. On March 2, Myanmar Now’s Twitter account reported that Kay Zon Nway was being held at Insein Prison in Yangon and has been denied access to her lawyer.

Salai David, a reporter for the Chinland Post, and Min Nyo, a DVB reporter, are also currently being held by police.

“Many journalists suffer from trauma”

JowharObservers spoke to “Sam” (their name has been changed for security reasons), a journalist at an independent publication in Myanmar:

Right now, it is dangerous to work on the ground, as the military targets journalists, strikes and arrests them. Normally, when we work, we put a press logo on a helmet or jacket so they can see that we are professionals, but that is not always wise. For example, if a police officer sees a journalist live-streaming, he will often stop or arrest them.

Journalists must also protect against police information in disguise, for example when taking cars home. Some taxi drivers are actually informants, and if they see that you are a journalist, they can take you to jail instead of taking you home. There are also police informants disguised as protesters in the crowds. So I always tell my team to be vigilant and protect themselves. Many journalists also have to “move and hide” – after covering the protests, they do not return to their homes and hide elsewhere.

On February 26, reporter Sit Htet Aung posted a photo on Facebook of a police officer running towards him with his baton in the middle. “Police tried to hit me,” it says in his caption.

Many journalists are suffering from trauma due to the violence during the protests. But even if the coup has threatened the press, I think it shows you that the real journalists are the ones who continue to cover the uprising. It is an important moment in our country’s politics and people need more information than ever before.

Of course, it is not just journalists who are targeted by the military – ordinary people from all walks of life are beaten and killed. We can not even call them the military anymore – they are terrorists. We can not call on any government forces, not the police, not anyone else, to protect us.

Since February 28, security forces have begun their violent crackdown on peaceful protesters since the coup began. The military has mobilized in cities including Yangon (the largest city in the country), Dawei and Mandalay, used tear gas, live broadcasts and even slingshots against protesters, detaining hundreds. As of March 4, at least 50 people have been killed since the coup began, the UN said – with 38 deaths on March 3 alone.