Home NEWS In the midst of verbal snags, Macron and Turkey’s Erdogan could be...
Facebook
Twitter
WhatsApp
Linkedin
LINE 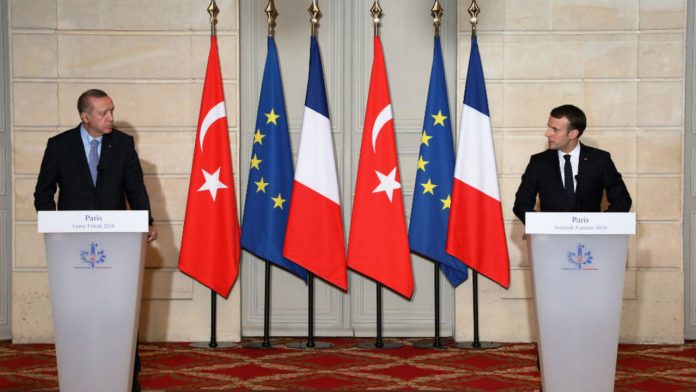 Relations between Turkey and France fell to new heights this week as the countries’ heads of state engaged in the latest match of vitriol, which had all the colors and spectacle of a ring sport.

French President Emmanuel Macron has been embroiled in a series of verbal discussions with Turkish President Recep Tayyip Erdogan in recent months as diplomatic ties between them continue to clash. At the heart of escalating enemies are a host of issues, including what Erdogan defines as French Islamophobia, energy disputes in the eastern Mediterranean and military support in Libya.

But on Friday, the acrimony reached feverish proportions when Erdogan urged the French to dump their leader at the 2022 ballot box when Macron is expected to seek re-election.

“My wish is for France to get rid of Macron’s problems as soon as possible,” Erdogan said.

Macron fired and called for “respect” during an interview with the news site Brut and said that Erdogan restricted the freedoms of the Turkish people.

Dr Ian Lesser, vice president and chief executive of the German Marshall Fund, said Erdogan’s approach to diplomatic barbering was nothing new because he had a “tendency to use his own rhetoric as part of his foreign policy”.

“The friction between France and Turkey is driven in part by personality,” said Dr Lesser. “In some ways, Erdogan takes this quite personally [as] he is increasingly unpleasant about the West and Turkey’s place in it and he sees France and its leadership embody everything he dislikes in Europe – culturally, politically, geopolitically. ”

Erdogan’s latest invective against Macron comes ahead of a crucial EU summit on December 10, in which France is expected to lead the press on sanctions against Turkey for violating Greek waters in search of gas or violating the UN arms embargo on Libya.

The strongman has long sought to join his European counterparts as an EU member and once seemed willing to do what the EU asked him to do. Turkey even agreed to be a gatekeeper in a crucial deal for the EU to limit the number of migrants entering Europe.

But the price of EU membership could lose its appeal.

Some critics see Erdogan’s verbal surprises against Macron and the EU as deliberate provocations, a way to dispel his image among nationalist Turks who see their president as a defender of Islamic values.

“There is a global tendency for leaders to personalize relationships – Trump and Putin were examples of this and Erdogan has been a different one,” said Dr Lesser.

“On a certain level, personality is important … but combined with intense nationalism that we see in Turkey and elsewhere [the rhetoric has] taken on a particularly angular character. ”

Erdogan inflamed tensions with Macron when he became the self-proclaimed voice of the Islamic world in the aftermath of the terrorist attacks on France in October.

In a suburb of Paris, teacher Samuel Paty was beheaded by an 18-year-old Islamist for showing students drawn by the Prophet Mohammad in a community course on free speech. This was followed days later by a church attack in Nice where a radicalized man armed with a large knife killed three people.

When France emerged from its collective grief, Macron urged the French to rally behind the republic’s values ​​of secularism, or laïcité, in opposition to attacks from radicalized elements. But his passionate speech led to furore when he said that Islam was “in crisis all over the world today”. Erdogan’s response was quick and personal, saying Macron needed to check his mental health.

The Turkish leader inflamed conflicting flames by accusing France of being constitutionally Islamophobic and urging Muslims everywhere to boycott French goods. He also sought solidarity with other Muslims in France, who he said were “exposed to a lynching campaign similar to that of Jews in Europe before World War II”.

While images of Macron burned in Pakistan, Egypt and Iran, Erdogan’s cry for unity fell mostly elsewhere in the Arab world.

French authorities condemned Erdogan’s words as Turkish “propaganda” against France and immediately recalled its ambassador to Turkey for talks.

Apart from the role of the personality in stimulating the current animosities between the two strong leaders, there is also a desire to increase support at home.

“In each other, Macron and Erdogan have found the ideal enemy,” Asli Aydintasbas, a fellow at the European Council on Foreign Relations, told the Washington Post. “This spit works for both leaders in some strange way, both domestically and in terms of the influence they are trying to project abroad.”

Even with an incoming US Biden administration likely to take a more active role in international affairs, including in Europe, it may not be enough to encourage Erdogan to curb his attacks on Macron.

“Erdogan is a skilled politician who has made the journey from liberal reformist to something tougher and authoritarian,” said Dr Lesser. “There is a very small price to pay in Turkey for a pronounced attitude towards France and Europe. It is a political plus for Erdogan because the mood of nationalism is widely shared – even by the opposition. ”

Macron can also be driven somewhat by domestic motives. His fierce defense of secularism following the recent terrorist attacks and attempts to better integrate Islamic practice into French culture could help his chances of being re-elected if he meets right-wing leader Marine le Pen 2022.

“As for France’s greater relationship with the Muslim world, Turkey will be part of the calculation in terms of French politics,” said Dr Lesser. “As the French president is trying to deal with this relationship, a calculation must be made on the French side of how far it is willing to push Ankara.”