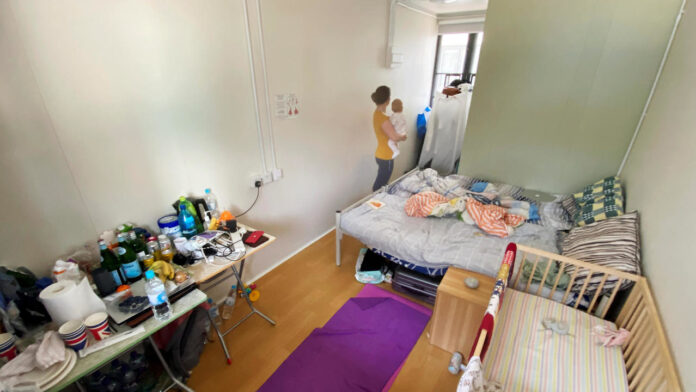 Families in Asia’s financial hub in Hong Kong are suffering from isolation and trauma after strict coronavirus rules have led to children being separated from parents and those with newborns in small quarantine quarters for up to 14 days.

Hong Kong authorities have ordered that anyone who tests positive for the virus must go to hospital, including infants, while all their close contacts, including those who test negative, are sent to makeshift quarantine camps.

“It’s crazy,” said one mother, who said she suddenly had to stop breastfeeding after separating from her seven-month-old son last week after being diagnosed with COVID-19.

“I got a fever last night because I went from breastfeeding to 100% pumping,” said the woman, who asked not to be identified.

Separating families over the virus is not common in other developed cities, say legal experts.

The Hong Kong government told Reuters late Monday that in COVID-19 cases involving children, the public hospital will “in special circumstances, decide whether their parents can stay with the children in hospital”.

Family members living with the case will be treated as close contacts and admitted to a quarantine center. Subject to assessment on a case-by-case basis, guardians can be arranged by the family to accompany them with special needs, such as infants, it is said.

Shahana Hoque-Ali, a researcher who moderates the Hong Kong quarantine support group on Facebook, said it had helped in more than 100 cases of children who had been separated from their parents in the past year, with dozens in the past week.

A separate city-wide petition circulating online on Monday called on the government to allow young children the option of home quarantine. About 4,700 of the targeted 5,000 residents registered in a few hours, according to the website.

Many foreign families with young children were among hundreds of residents who were sent to quarantine last week after an outbreak in a popular upscale gym in Hong Kong’s Sai Ying Pun district.

That case has entrenched bankers, lawyers and the city’s international school network, with some teachers and students infected.

Separately, a group of eight children and parents who participated in a playgroup last week were quarantined after a parent was positively confirmed due to the gymnastics outbreak.

The rest of the group tested negative but they still had to quarantine.

“I’m really worried, it’s such a small space. Three of us in this room for ten days will not work,” said Nicholas Worley, whose wife Kylie and 15-month-old son Hunter joined the playgroup.

The quarantine rooms in Penny’s Bay that accommodate Worley and many others are 18 sqm. (194 sqm) in size and lacks a refrigerator, cooking facilities or baby equipment.

While the staff there did their best to help, the facility is not designed for families, residents said.

Worley, who heads the consulting firm Bains PR in Asia, said that dangers in the room, such as sharp nails and edges, gave rise to further concerns about his son’s safety.

The trauma and the psychological impact on families is intense, says a 40-year-old man in quarantine with his two small children.

“It’s an absolute nightmare, it’s just such a mess,” said the man, who sought anonymity.

On Sunday, a class of 35 nine-year-olds from the city’s port school were told they needed to be quarantined, its CEO, Dan Blurton, told Reuters.

“Parents and the school have strongly called for more humane alternative arrangements for the treatment of young children,” he added.

Legal experts said there were no established guidelines for family separations, and each case was handled separately.

Hong Kong lawyer Kirsteen Lau said the legal health representative had ample discretion to grant or deny permission for a child or parent to enter a place of isolation.

However, this meant that the rules “provide very little guidance on what circumstances would make it possible for a parent and a child to stay together”, she added.

Banned from the EU for over a year, tourists are allowed to visit, subject...

hanad - May 10, 2021
Thanks to a global vaccination campaign, the European Union has pledged to relax travel restrictions for non-EU residents and citizens. Jowhartakes a look at...