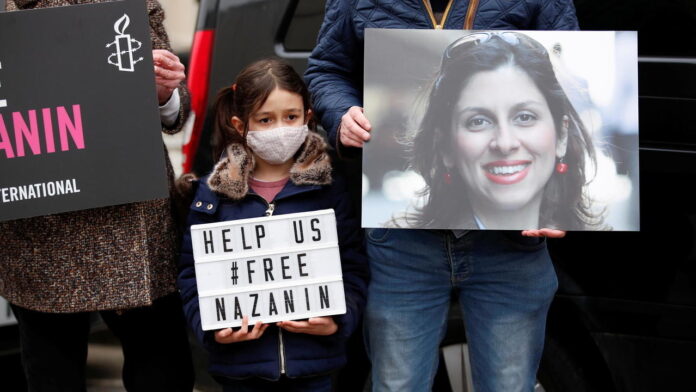 British-Iranian dual citizen Nazanin Zaghari-Ratcliffe appeared in a Tehran court on Sunday to face new charges of “propaganda against the system”, a week after serving five years in prison, her lawyer said.

The hearing has led the family and supporters to hope for a speedy release of the 42-year-old, in a case that has increased diplomatic tensions between London and Tehran.

“The hearing took place in a very calm and good atmosphere, in the presence of my client,” her lawyer Hojjat Kermani told AFP, adding that the verdict would be announced at a later and unspecified date.

According to Kermani, she is now being prosecuted for “propaganda against the system for participating in a demonstration in front of the Iranian embassy in London” in 2009.

“Given the evidence presented by the defense and the legal process, and the fact that my client has also served his previous sentence, I hope she will be acquitted,” the lawyer added.

In London, Zaghari-Ratcliffe MP Tulip Siddiq said “no verdict was handed down”, but added that “it should be delivered within a week”.

British Foreign Secretary Dominic Raab said on Sunday that the new allegations against Zaghari-Ratcliffe were “unacceptable”.

“It is unacceptable that Iran has chosen to pursue a second completely arbitrary target against Nazanin Zaghari-Ratcliffe,” Raab wrote on Twitter.

“She must be allowed to return to her family in the UK without delay. We will continue to do everything we can to support her,” he added.

Zaghari-Ratcliffe was arrested on holiday in 2016 and convicted of plotting to overthrow the regime in Tehran – accusations she strictly denied.

The mother of one worked at the time as a project manager for the Thomson Reuters Foundation, the media organization’s philanthropic wing.

She has been under house arrest for several months and has had her ankle removed, which gives her more freedom of movement and allows her to visit relatives in Tehran.

She ended her sentence on March 7.

One day later, her husband, Richard, and their six-year-old daughter, Gabriella, kept watch outside the Iranian embassy in central London, demanding that she return home.

He tried to deliver an Amnesty International petition signed by 160,000 supporters demanding that his wife be released, but was rejected.

Earlier this month, Richard Ratcliffe told the BBC that her detention had “potential to continue and continue”.

Media in both Britain and Iran and Richard Ratcliffe have drawn a possible link between Nazanin’s detention and a British debt dating back more than 40 years.

The British government has previously acknowledged that it owes Iran up to 300 million pounds (350 million euros), but both countries have denied any connection to the Zaghari-Ratcliffe case.

She has been temporarily released from Tehran’s Evin prison and has been under house arrest since the spring due to the coronavirus outbreak.

In prison, she suffered from a lack of hygiene and even considered suicide, according to her husband.

Iranian authorities have consistently denied that Zaghari-Ratcliffe was treated incorrectly.

On Friday, the human rights group Redress submitted a report to Raab, saying it “confirms the severity of the abuse suffered by Nazanin”.

The legal campaigns said they “believe that Iran’s treatment of Nazanin constitutes torture”.