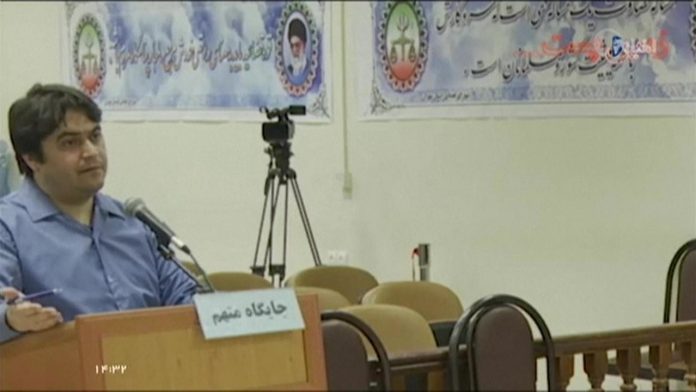 Iran on Monday faced a growing international backlash over its execution of French-based dissident Ruhollah Zam, with Western governments accusing Tehran of abducting him abroad to stand trial.

Zam was hanged on Saturday after being sentenced to death for his role in protests during the winter of 2017-18, when he ran a popular social media channel that gathered opponents of the regime.

He had lived in Paris for several years after receiving refugee status in France.

The motivation for his trip is still unclear, but activists say he was lured to travel to Iraq, captured by Iranian security forces and then transferred to Iran for trial.

The German Foreign Ministry said in a statement on Sunday that it was shocked by the circumstances surrounding Zam’s conviction “especially of … the kidnapping from abroad”.

UN rights chief Michelle Bachelet said she was “appalled” by the execution, adding that there were “serious concerns” that Zam’s capture outside Iran “could constitute an abduction”.

After Iranian state television broadcast what it described as an “interview” with Zam while he was detained in July, Bachelet also said that his sentence was “symbolic of a pattern of forced confessions extracted under torture and broadcast on state media used as a basis for to judge people. “

The international furore over Zam’s execution also comes at a very sensitive time, with European powers keen to revive the international deal on Iran’s nuclear program when incoming US President Joe Biden takes office next year.

On Sunday, Iran’s foreign ministry summoned German and French envoys to protest the EU’s condemnation of his execution over the weekend.

In a blow to the proponents of dialogue and trade with Iran, the organizers postponed a major forum for trade between Iran and Europe due to begin on Monday.

“The organizing committee of the Europe-Iran Business Forum has decided to take the exceptional step of postponing the conference,” the organizers said in a statement late Sunday.

“European and Iranian businesses still see significant potential and value in commercial exchanges,” they added, expressing hope that the conference would take place in the near future.

The French Foreign Ministry had said on its Twitter account that following the “barbaric and unacceptable execution” of Zam, its ambassador to Tehran, as well as those in Germany, Austria and Italy, withdrew their participation in the forum.

“#nobusinessasusual”, it said in a hashtag.

But in Tehran, President Hassan Rouhani predicted that relations between Iran and Europe would not be affected by the execution.

“I do not think this issue will harm relations between Iran and Europe,” Rouhani told reporters, noting that the death penalty is part of Iranian law.

Activists have argued that the execution should draw global attention to the use of the death penalty in Iran, which comes three months after the execution of wrestler Navid Afkari – who was convicted of killing an official during protests – caused great anger.

Iran executes more people each year than any other country than China.

Amnesty International said that Zam “was abducted during a visit to Iraq in October 2019 by Iranian revolutionary guards, apparently with the help of Iraqi intelligence services, and forcibly returned to Iran.”

Human Rights Watch researcher Tara Sepehri Far said in a statement that the execution “shows the extent to which Iran has armed the cruel and inhuman use of the death penalty as a tool of repression.”

On Monday, the United States for the first time accused Iran of directly interfering in the “probable death” of former FBI agent Bob Levinson, who disappeared 13 years ago, and imposed sanctions on two intelligence services.

“We will not trust those who played a role in his disappearance,” Pompeo said.