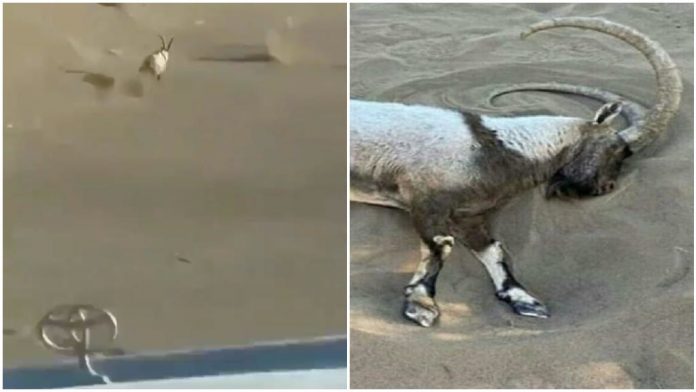 Alireza Shahrdari is a renowned Iranian environmental activist and expert on reptiles and rodents:

The number of safaris has increased over the past four years. It’s amazing how many city jeeps and pickups you now see in wilderness areas.

Previously, the only people who participated in this type of activity were adventurers and professionals in the tourism industry and the respected environment. But now this activity has been opened to the public. Hundreds of tourist agencies in the cities next to the deserts now offer excursions [Editor’s note: Online, prices range between 250,000 and 3 million tomans (roughly equivalent to eight to 95 euros), depending on the type and the length of the excursion].

This photo shows how safari vehicles have damaged the natural landscape of Maranjab.

The frequent passage of vehicles has damaged this erg, or field of dunes, in Mesr, as shown in this photo taken in September 2020.

This image, published on a page advertising for another travel company that offers desert safaris, shows tire tracks that damaged the surface of a salt lake in the Maranja Desert.

“Some species are in imminent danger” The desert food chain is complex. The safaris not only kill animals directly, as was the case in the video that caused such an uproar in late October, but they also kill animals by destroying this chain. When they burn plants or drive over them, they destroy the food sources of rodents, reptiles and birds. When they run over the holes and scratches on these rodents and reptiles, they kill them. Fennec foxes and sand cats are just some of the species that have been extremely threatened by these safaris.

Several species face an imminent threat, including the desert monitor, scorpions, the Maranjab snake, the lizard Eremias kavirensis, which is native to the area around Dasht-e-Kevir and the Cheesman’s gerbils, to name a few.

From what I have seen, the most affected regions are Maranjab, as well as Mesr and Abouzeidabad, which are home to many unique flora and fauna. We are still discovering some of these species. In the last five years, for example, we have discovered two new types of rodents in these deserts.

There is no supervision of these safaris and absolutely no rules governing them. So that means people can do whatever they want. The only reactions I’ve seen so far are online protests by activists – that’s it.

There is only one solution. We need to stop these off-road safaris and limit them to limited areas. “

In Iran, there are 253 national parks, forests and protected nature areas. However, these safaris occur in areas that, although fragile, are not protected by any rules.

On very rare occasions, local courts have been able to restrict access to the Maranja Desert – but only for a short time. And this restriction was introduced to prevent men and women from partying there and acting in a “non-Islamic” way. No measures have been taken to protect ecosystems.