Home NEWS ‘Islam is being hyperpoliticalized in France, but Muslims are not in the...
Facebook
Twitter
WhatsApp
Linkedin
LINE 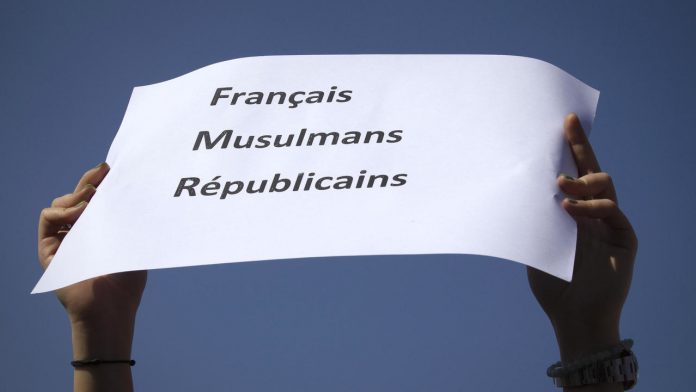 The resurgence of attacks by radical Islamists on French soil has revived fierce debates about Islam, secularism and discrimination in France, home to Europe’s largest Muslim population. But Muslim voices are largely kept out of the conversation.

On October 2, the day President Emmanuel Macron unveiled his plan to fight “Islamist separatism” in France, the mayor of the Paris suburb of Trappes, 35-year-old Ali Rabeh, was invited by French television station CNews to discuss Macron. proposed measures to eradicate radical Islam from France’s most affected banlieues.

Rabeh began by calling for more police and public services in his 32,000-strong city, a working-class and ethnically diverse municipality with the undesirable distinction of having seen more homemade jihadists travel to Syria, per capita. Inhabitant than anyone else in France.

The conversation quickly turned into a sharpness when one of the channel’s regular commentators asked the mayor about the spread of political Islam in Trappes, “an area lost to the republic”. He asked Rabeh if he was at all aware that sharia law was being applied there.

“There is no sharia law in Trappes or anywhere in France,” a confused Rabeh retorted. “There are laws in France to prevent anyone from applying sharia law. Help me get more police officers to Trappes instead of repeating nonsense on TV. ”

When another CNews expert took part in the controversy, lecturing the young mayor, Rabeh targeted the commentators and editors he accused of fighting France’s commercial 24-hour news channels with no real knowledge of the subject.

“These people know nothing, absolutely nothing about what is happening on earth, because they never set foot there,” he blasted. “They are experts in television newsrooms, experts in the green neighborhoods of Paris who only lecture and agitate.”

Amel Boubekeur, a researcher at the University of Grenoble who specializes in French Islam, says that such heated exchanges are a sign of a poorly informed debate about Islam in France, which dominates the airwaves and promotes tensions.

“There is a hyperpoliticization of Islam in France, but Muslims are largely kept out of the conversation,” Boubekeur said. “And it is also the academics who are doing real research, but who are being chased away by TV experts.”

While Islam is a favorite topic for politicians and the media, Muslims rarely get their opinion, Boubakeur argued. The result is a difficult understanding of the extraordinary diversity of opinions and customs among the estimated five million people that make up France’s Muslim population, the largest in Europe.

A banner entitled “French and Muslim, proud of our two identities” at a demonstration rally in Paris. © Geoffroy Van der Hasselt, AFP

There are several reasons for this, including a structural reluctance on the part of France’s secular state to recognize and engage in religious pluralism. Boubakeur also pointed to a legacy from France’s colonial past “in the tendency to regard Muslims as a single, homogeneous bloc” with an immigrant background.

“And then there is the growing weight of the far right, which has imposed its favorite topics – Islam and immigration – at the top of the agenda,” the sociologist added.

This has paved the way for hate speech from people like Éric Zemmour, another CNews pillar who claims that Muslims should choose between Islam and France, ignoring the overwhelming majority of French Muslims who uphold the country’s laws and values.

In his speech on October 2, Macron was careful to distinguish between the majority and the small number of radicalized Islamists who promote hatred of France and the Western way of life.

“The problem is an ideology that claims that its own laws must be better than those of the republic,” Macron said. He stressed that he was referring to “radical Islamism” and not Muslims in general, although he also claimed that Islam was “in crisis all over the world” – a claim that has disturbed some Muslims far beyond France.

The French president reiterated his position on October 21 after the gruesome murder of teacher Samuel Paty by an 18-year-old radical Islamist in a suburb of Paris. He promised that France would never give up freedom of speech and the right to mock religion, including the Charlie Hebdo caricatures of the Prophet Mohammad that Paty had shown his students in class.

Two weeks later, as angry protests against France and its president swept across the Muslim world, Islamist terrorism struck French soil again with the deadly stabbing of three people in a church in Nice on Thursday. The horrific attack carried out by a 21-year-old Tunisian immigrant was quickly condemned by French Muslim leaders who called for celebrating Mawlid – marking the Prophet’s birthday – to be canceled.

Evil over the recent resurgence of Islamist attacks has given rise to a more robust response to a murderous ideology that has repeatedly shed blood on French soil – and a more confident defense of the core principle of laïcité or state secularism. It has revived a dispute between rival understandings of French secularism, which disagree on how far the state should go to assert religious neutrality in public space.

According to Rim-Sarah Alouane, a law teacher specializing in religious freedom at the University of Toulouse, French secularism is increasingly becoming a “weapon” to cast Muslim votes – and not just the radicals.

“Politicians, experts and commentators use laïcité to remove any visibility [of religious minorities from the public sphere], and is currently being used against Muslims, ”Alouane said.

She pointed to a discrepancy between Macron’s concern about not lumping together moderates and radicals and a harsher rhetoric from members of his government for whom criticism of irreconcilable forms of secularism is a sign of complicity in the terrorists.

Proud to be French

The term “Islamophobia” – used to refer to hatred of Muslims – has long been the subject of fierce controversy. Since the recent attacks, people who use the term have at best been described as adherents of radical Islam and at worst as accomplices.

According to Razika Adnani of the Foundation for Islam in France, a body designed to promote a moderate form of Islam and improve relations between the French state and Muslim communities, the term “Islamophobia” has long been used by Islamists to limit all criticism of Islam preaching the.

Adnani said France was guilty of letting foreign countries finance the country’s mosques and give to its imams, “who have no knowledge of this country and its values.” She welcomed Macron’s promise to “free Islam in France from foreign influence” and stressed that the country is now paying “very dearly” for its past mistakes.

“Islamists want to live in separate communities without respecting French laws and values, and that is something that France cannot accept,” Adnani said. She added: “Muslims who have come to France want to be French and live here, but they are hostages to the Islamists.”

According to a survey of France’s Muslim population published by the Ipsos Institute earlier this year, 81 per cent of respondents had a positive view of French secularism and 77 per cent said they had no problem practicing their religion in France. When asked if they loved their country, 90 percent answered “yes”, and 82 percent said they were proud to be French – which corresponded to the percentages of the rest of France’s population.

However, the same survey showed that 44 percent of French Muslims believe that the rest of society has no regard for them. The figure rose to 61 percent among Muslims living in households earning less than the minimum wage.

Ammunition for the Islamists

The overlapping social, geographical, ethnic and religious discrimination perpetrated by many French Muslims living in the country’s most disadvantaged suburbs has been abundantly documented by sociologists – as has their exploitation of Islamist radicals.

Dounia Bouzar, an anthropologist and member of the Observatory of Secularism, a state-funded watchdog, warned that irreconcilable interpretations of laïcité also provided ammunition to France’s enemies. She pointed to the frequent and much talked about rows of clothes worn by some Muslim women, such as the hijab.

Last month, several French lawmakers walked out of the National Assembly in protest of the presence of a student union representative wearing a Muslim veil and igniting a vitriolic debate. There was similar unrest last year when a politician in Dijon asked a Muslim mother on a school trip to remove her hijab. In both cases, the women violated the secular laws of France.

A woman has a poster reading “my veil is my freedom” as she participates in a protest against Islamophobia in Paris on November 10, 2019. © Geoffroy Van der Hasselt, AFP

According to Bouzar, such incidents are routinely exploited by Islamists to back up their claims that Muslims are not free to practice their religion in France. The difficulty, she said, is finding the right balance between condemning this fraud while acknowledging the legitimate complaints of marginalized societies.

“Radical Islamists are trying to portray their ideology and their ‘separatist stance’ as a defense of Islam,” she said. “Those who condemn this should not be treated as ‘Islamophobes’. But neither should the very real stigma of Muslims be denied or dismissed. ”

Bouzar added: “Every time we deny the discrimination and negative stereotyping that many Muslims face, we help the radical groups that give birth to the discrepancy between the Republican promise of equality and the reality they experience every day.”

In the midst of the furor triggered by last month’s National Assembly, only a few went to find out what the veiled student’s representative had to say. Her voice had effectively been silenced – by female lawmakers marching out in the name of women’s rights.

Fatima Bent, the leader of Lallab, a Muslim feminist organization that fights for women’s right to dress and practice their religion as they wish, claims that feminists who avoid Muslim women for wearing a veil are guilty of the sin they condemn.

“Using a woman’s struggle to oppress another woman is not feminism,” she said.

Bent’s group condemns an “occupation” of media organizations and politicians, saying Muslim women are routinely subjected to intrusion, harassment and violence. It describes itself as neither pro- nor anti-blur, but pro-choice.

“There are constant debates about Muslim women, their veils, their bodies – but women are not part of the debate. It is a violation of their intimacy, ”Bent explained. She said Lallab was often accused of “advocating the hijab” and lamented a “demonization of those like us who seek to fight both Islamism and Islamophobia”.

Like several analysts, Bent lamented the lack of nuance and complexity in discussions about Islam in France. Muslims are not a monolithic group, she stressed, and there is no appropriate norm for Muslim women.

“We defend women who are forced by their families to wear a veil, and we defend those who are prevented from doing so by societal judgments – it is not one or the other,” she said, warning that expelling women was no way to liberate them.

Bent said Lallab does not deny the existence of radical ideologies that preach violence and hatred, or the patriarchal oppression that some Muslim women have suffered. However, she added that this should not be used to stigmatize all Muslims.

“France is going after the wrong goal,” she said, warning that “manipulation of laïcité creates a confusion between radical Islamists and other Muslims, which ultimately encourages Islamophobia and helps the extremists”.