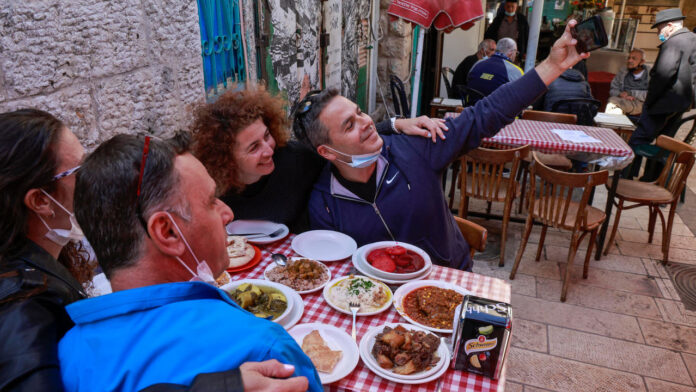 Israel took another step toward normalcy after Sunday’s pandemic, opening restaurants, bars and cafes to vaccinated “green pass” holders, with about 40 percent of the population completely vaccinated against coronavirus.

“We are coming to life,” Prime Minister Benjamin Netanyahu declared as he cut himself into a pastry at a cafe in Jerusalem, according to a video posted on Facebook.

Israel, which launched its vaccination campaign in December, has given the recommended two blows of the Pfizer / BioNTech vaccine to more than 3.7 million of its approximately nine million people.

Almost five million have been shot.

The country launched its green passport program last month, so that a controlled number of people with evidence of full vaccination – or those who had recovered from Covid-19 – could enter gyms, pools and other facilities.

But Sunday’s slate with reopening has been highly anticipated, as it marks the restoration of services that affect the daily lives of many Israelis.

Restaurants are now allowed to resume dinner restaurants with up to 75 percent capacity, with a lid of 100 people and with tables two meters apart.

Green passport holders can also now have a drink in a bar – but can not yet strike up a chat with a stranger sitting on the stool next to them, with rules that require an empty space between patrons, unless they live together.

Eating and drinking on terraces does not require a green passport.

A large number of students, many of whom have been outside the classrooms for several months, will also begin returning to school this week, while hotel event halls, sports venues and places of worship reopen for holders of green passes with on-site capacity limits.

Israelis stranded abroad during a week-long airport closure will also be allowed to return home in increasing numbers this week, starting with 1,000 arrivals allowed on Sunday.

‘We must be ready’

Netanyahu, which faces a tough re-election in two weeks, has put Israel’s robust vaccination at the center of its campaign.

While many countries have struggled to secure vaccine supplies, Netanyahu’s government has remained well-sorted thanks to an agreement with Pfizer to share medical data on the product’s impact.

The prime minister, who has been in power since 2009, has said he wants the Israeli population over the age of 16 vaccinated by the end of this month, hoping the economy will open almost entirely in time for the Easter weekend, which begins March 27.

“Just need to get a few hundred thousand more people … especially over the 50s, then we’re done,” Netanyahu said at the Jerusalem cafe, gesturing as if he had hit his arm with a shot.

While Israel’s vaccination rate remains among the fastest in the world, the Jewish state has met with extensive talks, including from the UN, to ensure the vaccination of Palestinians living under occupation in the West Bank and those in Israeli-blocked Gaza.

Netanyahu’s government has announced plans to vaccinate 100,000 Palestinians licensed to work in Israel.