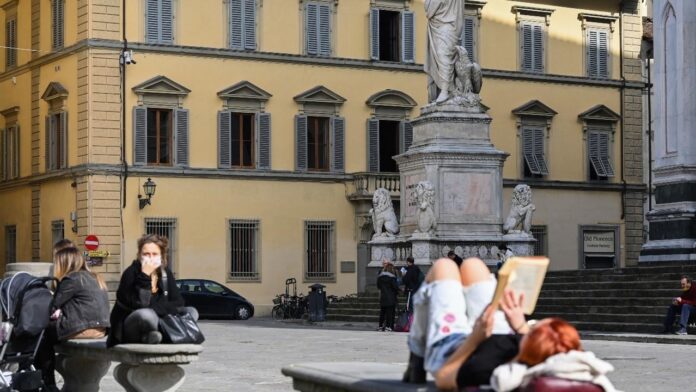 Prime Minister Mario Draghi warned on Friday when his government was ready to tighten restrictions in most of the country.

Schools, restaurants, shops and museums are expected to close on Monday in most regions, after Italy registered nearly 26,000 new Covid-19 cases and a further 373 deaths on Thursday.

During a visit to a new vaccination center at Rome’s Fiumicino airport, Draghi did not elaborate on the new measures but said his cabinet had agreed to adopt “appropriate and proportionate” restrictions.

“Unfortunately, more than a year after the onset of the health condition, we are facing a new wave of infections,” he said.

He said the figures – which show an increase of almost 15 percent in infections over the past week – required “extreme caution” to limit deaths and pressure on health care.

“The memory of what happened last spring is alive and we will do everything we can to prevent it from happening again,” he added.

More than 100,000 people with coronavirus have died in Italy since the pandemic swept across the country a year ago, triggering a monthly lockout and triggering the worst recession since World War II.

Draghi’s office previously confirmed that the whole of Italy would be classified in the “red zone” with the highest risk during the Easter weekend, between 3 and 5 April.

The spokesman said that the cabinet had agreed on new guidelines for the classification of red zones, in which residents are encouraged to stay at home except in emergencies, work and health reasons.

As of Monday, each region with more than 250 cases per 100,000 inhabitants will automatically go red.

The latest official data is expected later on Friday, but figures from the GIMBE think tank published on Thursday for the week ending March 9 suggest that most regions will be affected.

Previously, the classification of red zones was based on a number of criteria, which involved a certain political effort.

Media reports had suggested that Italy’s more populated northern regions such as Lombardy, which includes Milan, would be among those going red, as would Lazio, which includes Rome.

The new restrictions, in addition to the current 22:00 to 05:00 curfew on site throughout Italy, will last until Easter.

GIMBE President Nino Cartabellotta warned on Thursday of an increase in the number of new cases for three weeks in a row, which “confirms the start of the third wave” of Covid-19.

He said that in more than half of Italy’s 20 regions, “hospitals and, in particular, intensive care units are already congested”, with regular health services shut down.

Italy launched its coronavirus vaccination campaign in late December, but as in other parts of Europe, it has been hit hard by delays in jabs supplies.

Concerned about side effects reported by the AstraZeneca / Oxford vaccine, the Italian health regulator on Thursday had to suspend a batch of jabs, although there was no evidence of a proposed link to blood clots.

Draghi has made the intensification of the vaccine one of the priorities of his new national unity government, which took over last month when the former center-left coalition imploded.

On Friday, he said that regardless of the outcome of a review by the European Medicines Agency, “I can assure you that the vaccination campaign will continue with renewed intensity”.