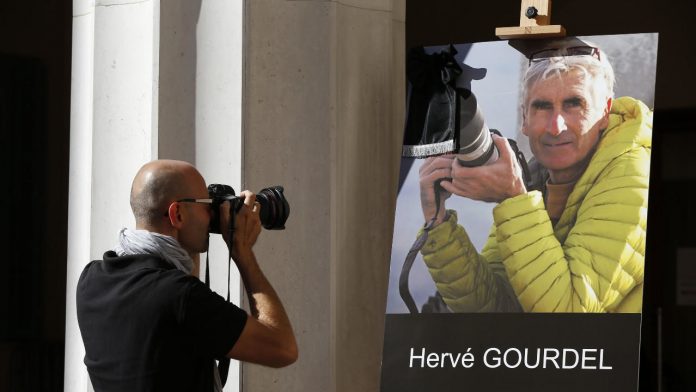 Fourteen people are being prosecuted in Algiers on Thursday for the murder of French mountaineer Hervé Gourdel, more than six years after he was beheaded by jihadist militants during a hiking trip.

Herve Gourdel, 55, was abducted on September 21, 2014 while hiking in the Zoo National Park in the Kabylie region, a popular destination for hikers that has long been a haven for jihadists.

Three days after his disappearance, gunmen from the militant group Jund al-Khilafa published a video of his brutal murder.

The French government rejected their demand to stop airstrikes on the IS group in Iraq and Syria.

Gourdel’s body was found in a jailed grave three months later after a massive hunt with thousands of soldiers.

A total of 14 people are facing charges over the case.

Only one is known to be in custody: the suspected jihadist Abdelmalek Hamzaoui, who is to appear in a court on the outskirts of Algiers on Thursday.

Seven others are being tried in their absence, but no details have been released about the charges they face.

Gourdel’s Algerian guides are also accused of failing to notify authorities of his kidnapping, while another, unidentified person faces unspecified charges.

Gourdel’s coffin, with the hiker’s backpack and cane, pictured before flying to Paris in January 2015. © Farouk Batiche, AFP

Gourdel’s partner Francoise Grandclaude welcomed the fact that the trial “is finally taking place” and said it could offer “hope for families and loved ones of victims of terrorism”.

Gourdel’s brutal killing caused shock both in France and in Algeria, where it triggered memories of the decades-long civil war between Islamists and the army in which some 200,000 people died.

The assassination came in the wake of the IS group’s dramatic takeover of northern Iraq and Syria in the summer of 2014.

Hamzaoui, who was arrested in late 2014 on suspicion of belonging to Jund al-Khilafa, is charged with “kidnapping, torture and premeditated murder” and joining an “armed terrorist group” – charges that could carry the death penalty.

Gourdel’s five Algerian guides, who were originally caught with him but released hours later, will also appear in court.

They are accused of failing to tell the authorities that they hosted a foreign national and that they did not alert immediately after he was kidnapped.

The Algerian Ministry of Defense has said that this delay had given the kidnappers time to flee.

But a lawyer for Oussama Dehendi, one of the guides, questioned the logic of the charge, which could carry a sentence of up to five years in prison.

“My client informed the authorities as soon as he could – after he was released by the kidnappers,” Faycal Ramdani told AFP. “It was this that got the authorities to act.”

The authorities have not published any details about the other defendants.

Two decades since the end of Algeria’s civil war, authorities regularly report collisions between the army and militant groups.

They say that since Gourdel’s death, at least seven jihadists involved in his killings have been killed in clashes.

The suspected head of Jund al-Khilafa, Abdelmalek Gouri, was killed in late 2014, also in the Kabylie region.

His successor, Bachir Kharza, was killed the following year in a mountainous part of the province of Bouira, west of the Zoo National Park.