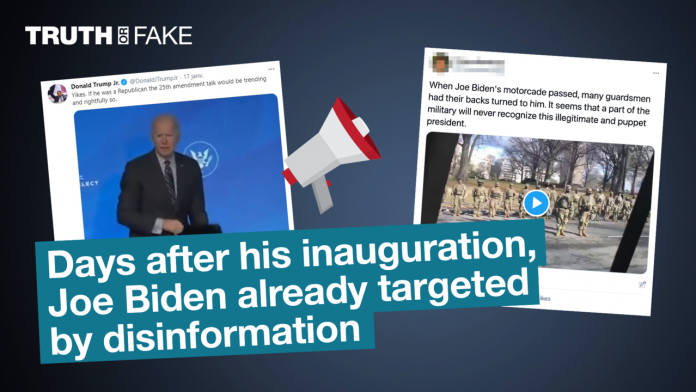 A video from January 17 showing former President Joe Biden appearing lost and confused when he was on stage at an event has received more than three million views on Twitter. It was picked up and shared by Donald Trump Jr., son of the former president, who claimed it was proof that Biden was senile and mentally unfit to take office. However, it appears that the video has changed.

Joe Biden’s inauguration went smoothly, despite security fears after supporters of former President Donald Trump stormed the Capitol on January 6. But on social media, a video shown more than 20,000 times showed soldiers turning their backs on Biden’s motorcade in protest. Jowharobserver teams reveal that this is incorrect – their position was in fact a joint security measure.

This section of Truth or Falsehood looks at the misinformation already being directed at the new US President:

Just days after his inauguration, US President Joe Biden was the target of online misinformation. © FRANCE 24