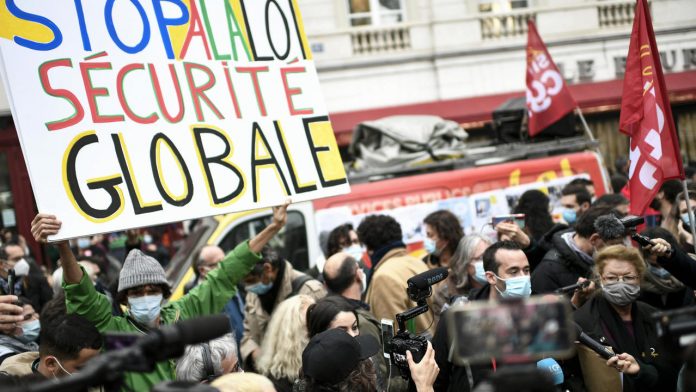 French lawmakers on Tuesday began debating a bill that could ban the spread of images of police officers’ faces, sparking protests in Paris and other French cities against the potential loss of control of abuses of power.

France’s security forces have long been accused of using brutal tactics when dealing with protesters, but also when confronting or arresting individuals, especially from black or Arab minorities.

And now Macron’s central government has proposed a new “comprehensive security law” that would introduce reforms such as giving more police authority – and potentially arming more of them – and expanding the use of surveillance drones in high-crime areas.

According to the law, which would apply to both civilians and journalists, it would be a crime to show pictures of a person’s face unless it has been erased. Posting on social media or elsewhere with the intent to undermine a servant’s physical or mental integrity ‘can be punishable by one year in prison or a fine of up to € 45,000 ($ 53,000).

Journalists and rights groups opposed the measure and took to the streets as lawmakers began their debate, uniting with Yellow Vest protesters and victims of police violence. Demonstrations took place in Paris, Bordeaux, Lyon, Grenoble, Marseille and other French cities.

In Paris, police fired water cannons and tear gas near the National Assembly, Parliament, as a number of young protesters began damaging property towards the end of a peaceful demonstration.

Journalists and rights activists say the stricter rules would effectively act as a “gag law” similar to a measure in Spain since 2015, which would prevent attempts to hold police accountable.

A series of incidents captured on video and spread on social media have led to reforms, which gained momentum this year with the “Black Lives Matter” movement in the United States after George Floyd’s death.

But police say they are increasingly under personal threat as they fight to carry out President Emmanuel Macron’s pledge to reduce crime and insecurity, especially in the poorer suburbs of Paris and other cities.

An attack on a police station outside Paris last month by dozens of people armed with fireworks and steel bars galvanized the government to take concrete measures to protect officers and improve working conditions.

Interior Minister Gérald Darmanin said the measure would “protect those who protect us”, especially in poorer areas where tensions are often high between law enforcement and immigrant communities.

The bill co-author Jean-Michel Fauvergue, a former head of France’s elite RAID police unit, rejected claims that the police were given new protection against criticism.

“This in no way prevents journalists from working,” Fauvergue told a news conference on Tuesday.

He said the law would only punish the publication of an officer’s face “with messages demanding hatred or violence”.

But the UN Human Rights Council warned that the proposal “could deter, even punish those who could provide parts of potential human rights violations through law enforcement, and provide a kind of immunity”.

Critics point in particular to the hundreds of violent complaints filed against officials during the “yellow vests” anti-government rallies that erupted in 2018, which saw fierce clashes between protesters and police making headlines around the world.

In July, three officers were charged with murder due to the death of a deliveryman, Cédric Chouviat, who was filmed by spectators as officers had him in a chokehold after the arrest for a traffic offense in Paris.

Chouviat said “I suffocate” seven times before his body limped.

“Black Lives Matter” also staged mass protests this summer against alleged police violence in France, especially over the death in 2016 in the custody of a 24-year-old black man, Adama Traoré.

“The publication of images of police interventions is legitimate and necessary for a democracy to function,” the auditor said.