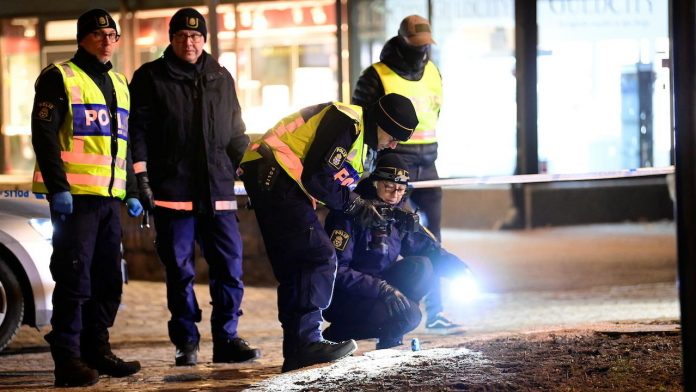 Swedish police said they were investigating possible terrorist motives for a knife attack on Wednesday in which at least eight people were injured, and that the attacker has been arrested after being shot and wounded.

Some of the victims were in serious condition and the suspect, a man in his 20s, was in hospital after his arrest, a police spokeswoman told a press conference. The man was previously known to the police for minor crimes, she said.

All eight victims were in hospital and three had life-threatening injuries, said Jönköping’s regional council on its website.

“We have initiated a preliminary investigation into attempted murder, but there are details in the investigation that lead us to investigate possible terrorist motives,” regional police chief Malena Grann told a news conference.

Police were alerted to the attack in Vetlanda, a town of about 13,000 people, around 3pm and initially said it did not appear to be a terrorist act.

“We heard a scream from the street. Then we saw a man come into the store and shout that he had been stabbed, Asa Karlqvist, owner of a flower shop, told the local newspaper Vetlanda-Posten.

“Blood flowed from his shoulder, so we got towels and squeezed the wound,” she said.

The situation was under control and there were no signs that anyone else was involved in the attack in the city of Vetlanda, 340 km south of the capital Stockholm, the police told reporters.

Prime Minister Stefan Lofven condemned the incident. “We confront such heinous acts with the combined power of our society,” he said in a statement, adding that he was in constant contact with both the police and the security services.

In April 2017, a radical Islamist drove a truck in crowds of customers on a busy street in central Stockholm and killed five people before crashing into a department store. He was arrested and later sentenced to life in prison.