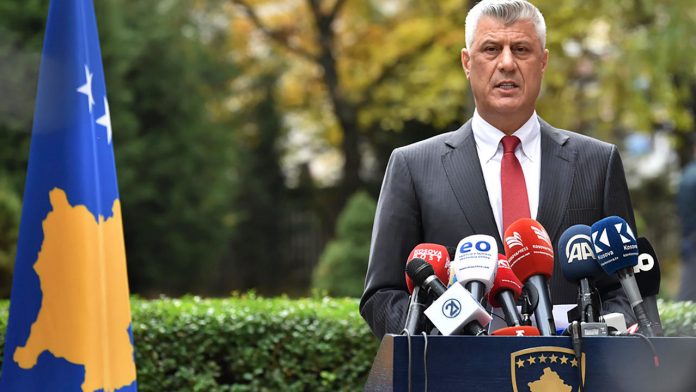 Kosovo President Hashim Thaci resigned on Thursday to face charges in a war crimes tribunal in The Hague, a dramatic case for a man who has been weaving across the former Serbian province for more than a decade.

The 52-year-old said he would resign to “protect the integrity of the presidency” after the court upheld an indictment against him from the 1990s conflict with Serbia, when Thaci was the political chief of Kosovo’s rebel army.

“I will work closely with justice. I believe in truth, reconciliation and the future of our country and our society,” he told a news conference in the capital, Pristina.

Thaci, a former prime minister who has been president since 2016, has long insisted on his innocence over a war that many Kosovars consider a “fair” struggle for their independence from Serbian oppression.

Kosovo’s majority ethnic Albanian population suffered severely during the conflict, which claimed 13,000 lives and ended only after a NATO bombing forced Serbian troops to withdraw from the province.

But rebel leaders of the Kosovo Liberation Army (KLA) – many of whom have continued to dominate politics – have also been accused of revenge attacks on Serbs, Roma and ethnic Albanian rivals during and after the war.

In June, prosecutors from the Kosovo Special Chambers in The Hague (KSC) accused Thaci and others of being “criminally responsible for nearly 100 murders” in addition to other crimes, including the disappearance of people, persecution and torture.

Thaci did not say on Thursday which specific charges in the indictment have been confirmed.

The president’s closest political ally, Kadri Veseli, also said on Thursday that an accusation against him had been confirmed by the court and that he would go to The Hague.

KSC was founded with EU support five years ago and operates under Kosovo law but is based in the Netherlands to protect witnesses from threats in a society where former rebel commands are enormously influential.

Prosecutors have twice accused Thaci of trying to undermine the court’s work.

At home, Thaci is not a hero for everyone.

To critics, he has become the face of a political elite whose corruption and mismanagement have done little to lift ordinary Kosovars out of grind poverty.

But few Kosovo Albanians will criticize the legacy of the KLA, with voices from across the political spectrum defending the war after Thaci was first accused.

Twenty years later, relations between Kosovo and Serbia are still tense and complicated, and Belgrade refuses to recognize the independence that Pristina declared in 2008.