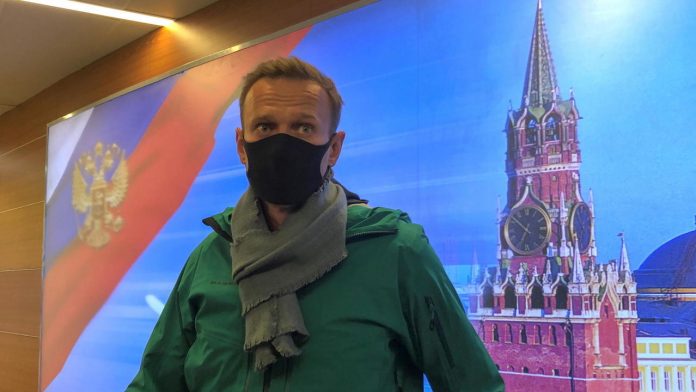 Russian opposition leader Alexei Navalny said on Monday that his treatment was beyond a “mockery of justice” when he was brought before a hastily organized court a day after his dramatic airport crackdown.

State prosecutors asked the president to detain the Kremlin critic for 30 days, hours after he was detained at a Moscow airport when he flew home for the first time since being poisoned last summer.

The United Nations and Western countries told Russia to immediately release opposition politicians and some countries demanded new sanctions. Moscow urged them to think about their own business.

Navalny, in a video from inside the police station, called the hearing “the highest degree of lawlessness” and slammed President Vladimir Putin, accusing him of throwing the penal code out the window in fear.

The Kremlin was expected to comment on its case later on Monday, but usually refers questions about the 44-year-old politician to law enforcement agencies.

About 200 Navalny supporters gathered outside the police station in temperatures of minus 18 degrees Celsius and demanded his release, a Reuters witness said.

Navalny’s detention was ordered by Moscow’s prison service in relation to alleged violations of a temporary prison sentence in an embezzlement case, which he says was trumped.

Monday’s court hearing, parts of which were livestreamed by Navalny’s allies, may decide that he be held in custody until another court decides to convert the 3.5-year temporary prison.

Four masked police detained Navalny at the passport control on Sunday night, the first time he had returned home after being poisoned by what German military tests showed was a nerve agent in Novichok, a version of events that the Kremlin rejects.

A possible target for new sanctions would be Nord Stream 2, a $ 11.6 billion project to build a natural gas pipeline from Russia to Germany.

The foreign ministers of Germany, Britain, France and Italy had previously called for Navalny’s release, and Czech Foreign Minister Tomas Petricek had said he wanted the bloc to discuss possible sanctions.

The UN human rights office demanded that Navalny be released immediately, saying he was “deeply concerned” by his arrest. It required due process in line with the rule of law.

Jake Sullivan, one of US President-elect Joe Biden’s top aides, asked Moscow to release Navalny, and US Secretary of State Mike Pompeo said he was deeply concerned about the arrest.

Analysis: Navalny must be in Russia, not in exile, to change countries

Russia’s Foreign Minister Sergei Lavrov said Western outrageous expressions of outrage were intended to distract its citizens from domestic problems and that Moscow was rude to potential damage to its image.

“We should probably think about our image, but we are not young ladies going for a ball,” Lavrov told reporters.

Moscow residents interviewed by Reuters TV were divided over Navalny’s detention, with some showing sympathy but others calling him stupid to come back.

“He probably did the right thing and acted like a real man (by returning),” said a Muscovite, Yuri Elizarov.

“But from a political point of view, he did not, because nothing will change here in the next few years.”