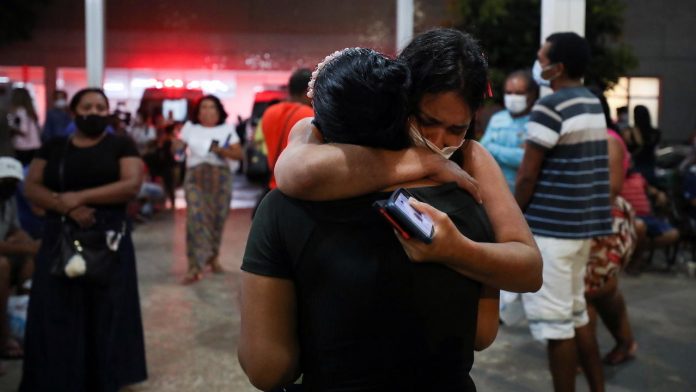 Dozens of COVID-19 patients in the Amazon rainforest’s largest city will fly out of state when the local health system collapses, authorities said Thursday, as declining oxygen levels meant some people began dying breathless at home.

Doctors in Manaus, a city of two million people, chose which patients to treat and at least one of the city’s cemeteries asked mourners to line up to come in and bury their dead. Patients in congested hospitals waited in despair all day when oxygen cylinders arrived to rescue some, but arrived too late for others.

The tribes urged the Amazon government to say it would transport 235 patients who are dependent on oxygen but are not in intensive care units to five other states and the federal capital Brasilia.

“I want to thank the governors who give us their hand in a human gesture,” Amazonian government Wilson Lima told a news conference on Thursday.

“The whole world is looking at us when there is a problem like the lungs of the earth,” he said, referring to a common description of the Amazon. “Now we are asking for help. Our people need this oxygen. ”

Many other governors and mayors elsewhere in the country later offered help in the midst of a flood of social media videos in which worried relatives of COVID-19 patients in Manaus asked supporters to buy them oxygen.

An oxygen cylinder for 5 people.

This is the situation of Saudi Arabia in Manaus.

The Governors will receive almost 1 bill for the prevention of the pandemic.

Brazilian Vice President Hamilton Mourão said on Twitter that the country’s air force had taken more than eight tons of hospital items including oxygen cylinders, beds and tents to Manaus.

However, federal prosecutors in the city asked a local judge to put pressure on President Jair Bolsonaro’s administration to increase his support. Prosecutors said later in the day that the most important air force in the region for oxygen transport “needs to be repaired, which stopped the emergency influx.”

Neither the Air Force nor the Federal Department of Health responded to a request for comment from the Associated Press.

The US Embassy in Brasilia confirmed that it had received a request from local authorities to support the initiative without providing details.

At the first peak, Manaus consumed a maximum of 30,000 cubic meters (approximately 1 million cubic meters) of oxygen per day, and now the need has more than doubled to almost 70,000 cubic meters, according to White Martins, the multinational company that supplies oxygen to Manaus’ public hospitals. At his press conference, Governor White Martins blamed the lack of access.

“Due to the strong impact of the COVID-19 pandemic, oxygen consumption in the city has increased exponentially in recent days compared to a volume that was already extremely high,” White Martins said in an email to AP. “Demand is much higher than anything predictable and … continues to grow significantly.”

The company added that Manau’s remote location constitutes a challenging logistics, which requires additional warehouses to be transported by boat and by air. It also said it was considering bringing supplies from neighboring Venezuela to alleviate the difficulties in Manaus.

The governor also advocated more health restrictions, including shutting down public transport and establishing curfews between 7 p.m. and 6 p.m.

The new measures challenged protesters who carried Brazilian flags through the streets on Thursday morning. Lima, once considered Bolsonaro’s ally, has faced criticism from supporters of the Conservative president for imposing new restrictions aimed at curbing the virus’ recent rise.

Bolsonaro has downplayed the risks of the disease, saying that the economic outcome of the pandemic will kill more than the virus. His son Eduardo, a lawmaker who heads the Committee on International Relations in Brazil’s lower house, was one of the many conservatives who devoted their supporters in December to challenging social distancing and disobeying the Home Order.

The Park of the Tribes, a community of more than 2,500 indigenous peoples on the outskirts of Manau, lasted more than two months without any COVID-19 symptoms. In the past week, 29 people have tested positive, says Vanda Ortega, a volunteer nurse in the community. Two went to emergency departments, but no one has yet required hospitalization.

“We are really very worried,” said Ortega, who belongs to Witoto’s ethnicity. “It’s chaos here in Manaus. There is no oxygen for anyone. ”

The increase in cases follows two months of more frequent gatherings, first during the local elections in November with large meetings and long lines of voters, followed by festivities at the turn of the year.

The city of Manaus declared a state of emergency on 5 January. Through the decree, the municipal board can temporarily employ staff, services and materials without public tenders. A separate decree suspends the approval for events and withdraws those already granted, while a third establishes telework for non-important municipal employees until March.

A paper published this week indicated that a new strain of coronavirus had been circulating in Manaus in mid-December. The newspaper said it raised concerns about greater transmissibility or potential for re-infection, although such possibilities remain unproven.

A positive COVID-19 test does not reveal which variant of the virus the patient has, but it is likely that the new strain has been partly responsible for driving Manau’s second wave, according to Pedro Hallal, an epidemiologist who coordinates Federal University of Pelota’s test program. Brazil’s most comprehensive.

“If it circulated in mid-December, it would probably circulate a lot more,” Hallal said by telephone. “So I think at least some of the new infections are due to the new strain. We do not have the definitive information on that, but it is very likely. ”