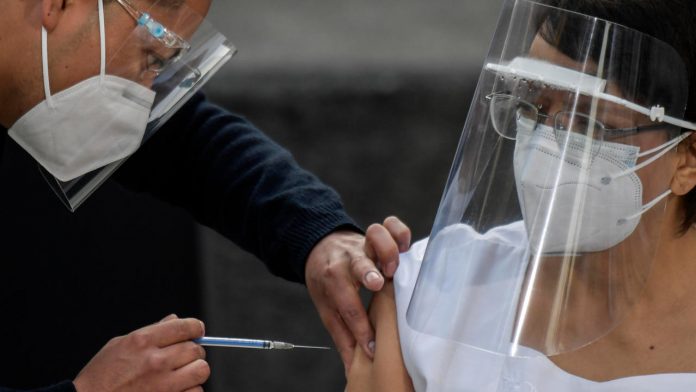 Frontline medical staff in Mexico and Chile were among the first to receive their vaccines while Costa Rica began its own vaccination program, with President Carlos Alvarado praising what “may be the beginning of the end of this pandemic.”

But global optimism was dampened when China and Brazil joined more than 50 governments restricting flights from the UK or air traffic in both directions, after the highly contagious new coronavirus strain first appeared there.

Thousands of trucks remained at a large British port as France sent 10,000 kits to test drivers before allowing them to cross the canal.

Despite the new burden that British Prime Minister Boris Johnson said was “up to 70 percent more transmissible” than the original coronavirus, Britain said rail and maritime links with France would remain open over Christmas.

Mexico launched its mass immunization program after receiving its first 3,000 doses of the Pfizer / BioNTech vaccine from Belgium.

“It’s the best gift I could get in 2020,” said 59-year-old Mexican nurse Maria Irene Ramirez when she received the injection at a hospital in the capital.

Mexico has registered more than 120,000 deaths in Covid-19 – the world’s fourth highest tax after the United States, Brazil and India.

In Chile, 46-year-old health care assistant Zulema Riquelme was the first person to receive a jab in the presence of President Sebastian Pinera.

“I am very excited and nervous,” she said, hours after the first 10,000 doses of the Pfizer BioNTech vaccine arrived by air.

Elizabeth Castillo, a wheelchair-bound 91-year-old nursing home resident, was the first person in Costa Rica to be vaccinated.

“I am very grateful to God, because I have asked so much for him. My life is very important to me, so take advantage of every moment,” she said.

Argentina, meanwhile, received the first 300,000 doses of Russia’s controversial Sputnik V vaccine on Thursday on a special flight from Moscow.

The country is the first in Latin America to approve the Russian vaccine.

Argentine President Alberto Fernandez has promised to get the first Sputnik V shot to prove that it is reliable after criticism that it was registered before major clinical trials began.