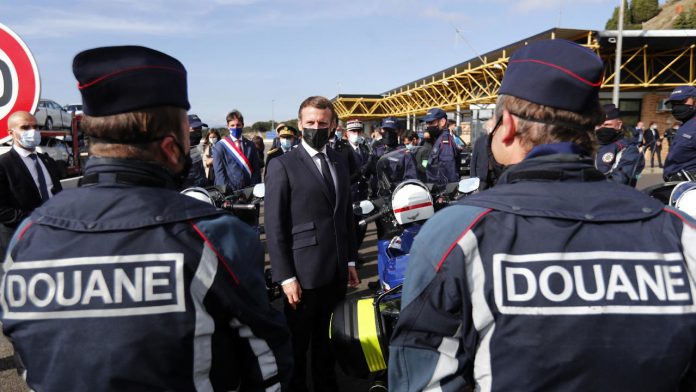 Europe needs to reconsider its open Schengen area, including more robust protection of the zone’s external borders, President Emmanuel Macron said on Thursday, following a series of Islamist attacks in France and Austria.

“I am in favor of a deep review of Schengen to reconsider its organization and strengthen our common border security with a proper border force,” Macron said during a visit to the French-Spanish border.

The president said he would present proposals for EU partners at an EU summit in December.

Europe has been hit by two attacks in the past week involving attackers who moved freely between the Schengen member states.

On October 29, a Tunisian man killed three people in a church in Nice. Brahim Aouissaoui had arrived on the Italian island of Lampedusa, off North Africa, five weeks earlier. After moving to the mainland, Aouissaoui traveled to France by train hours before launching his attack.

The jihadist who killed four people in Vienna on Monday traveled to neighboring Slovakia in July in an attempt to buy ammunition, Austrian officials say.

Macron said the latest attacks were a warning to Europe that “terrorism is everywhere”.

The proposals that Macron would present to the EU countries would be based on principals that he outlined in a letter to the citizens before the EU elections last year, said a junior minister.

In that letter, Macron wrote that Europe needed a common border force and a single asylum office, strict border control obligations and that each Member State would provide intelligence under the auspices of the European Internal Security Council.

On Thursday, the president said France would double the number of police officers manning its borders.

Almost 628,000 non-EU citizens were found to be illegally present in the 2019 bloc, an increase of 10% compared to the previous year, according to Eurostat data. More than 717,000 citizens outside the EU were denied entry, the highest number registered.

The French border police chief told Macron that there had been a sharp increase in attempts to cross the Franco-Spanish border since it reopened in June following the lifting of the Covid-19 restrictions. Many came from Algeria and Morocco, agents say.

“We must strengthen our fight against illegal immigration and human trafficking, which are increasingly linked to terrorism,” he said.

The Schengen zone consists of 22 of the 27 EU member states as well as Iceland, Norway, Switzerland and Lichtenstein. The UK and Ireland are not part of it.