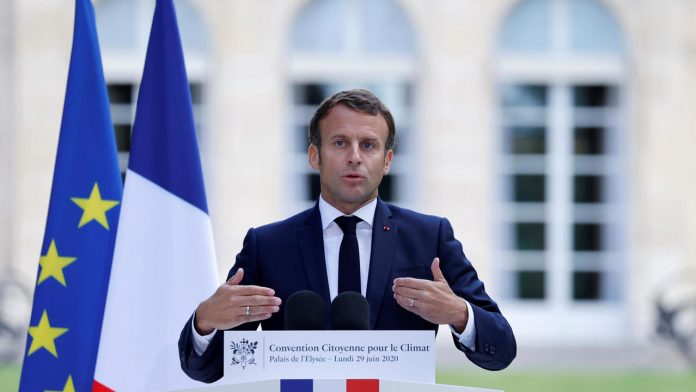 In June last year, French President Emmanuel Macron pledged € 15 billion in new funding to accelerate the transition to a greener economy and said he would be ready to call for a referendum on revising the constitution to include climate goals. Six months later, he is defending his record against critics.

Macron’s announcements on the environment in June had been a response both to proposals from Citizens’ Convention on Climate (CCC) which he had created, consisting of 150 randomly selected members of the French population, and to the weak victory of Europe Écologie-Les Verts ( EELV), France’s Green Party, in nationwide municipal elections.

When he created the Civic Council, Macron promised that its proposals would be presented to Parliament “unfiltered” and eventually turn into executive regulations or serve as a basis for a referendum. And in June, when the council presented its recommendations after nine months of work, the president announced that he accepted almost everyone.

Of the 149 proposals made, the president has decided to keep 146! He will hand them over either to the government, to parliament or to the French people, says a statement on the Élysée Palace website.

On Monday, just a few days before the December 12th anniversary of the Paris Agreement 2015, the Prime Ministers met with MPs and representatives of the CCC for two-day meetings on the topics discussed by the Council (Housing, Transport, Consumption, Food, Production and Employment) to “present the points adopted “cited sources who had been invited by AFP.

“It is about presenting them with the initial, long-awaited considerations on how their proposals will be translated before the text is presented to the Cabinet,” said Environment Minister Barbara Pompili.

However, members of the City Council expressed concern over the final wording of the legislation, after the government proposed that the scope of several measures be limited or delayed, especially due to the crisis affecting polluting sectors such as cars and aviation, particularly severe.

“It would have been good to have had some of the documents before the meeting, so that we could prepare. Now we will discover the climate law at the same time as the members of parliament, says Mélanie Blanchetot, a member of CCC to France TV Info.

Cyril Dion, a French film director, actor, writer and environmental activist originally appointed by Macron to help oversee the Citizens’ Group, recently launched an online petition to “save the Convention”, which has received over 350,000 signatures on two weeks.

“For the first time in history, a French president has agreed to put his faith in 150 randomly selected citizens, representatives of every reality in the country. “They worked for nine months to propose solutions, acceptable to all, to reduce greenhouse gases to less than 40 percent by 2030,” Dion wrote in his presentation.

“But discreetly, the government is now regretting and weakening a significant number of measures before they are formally presented to MEPs or to the French.

“That is why today we demand that the President keep his word and submit the proposals from the Citizens’ Convention on Climate Change ‘unfiltered’ to a referendum, to Parliament or for the direct application of legislation,” he wrote.

‘I do not need to lecture’

Macron reprimanded his critics in an interview with the French online media Brut on Friday, accusing them of not being willing to see any of the points needed to be discussed further.

“I do not need to be lectured on climate,” Macron said, listing some of the issues raised by his government. “No one has done as much as this government has done in three years.”

He insisted on the great respect he had for the work of the Civic Convention, but added: “You can not say that 150 citizens wrote anything, it is the Bible or the Koran!” he exclaimed. “I’m really very angry at the activists who first helped me but now say – you have to assume everything.”

“These are not questions that we can say ‘take it or leave it’ – that’s wrong,” Macron added.

Grégoire Fraty, co-chair of The 150, an association of 130 of the 150 citizens who took in the CCC, said after Macron’s interview, “We did not get much information on the subject, although the President pointed out the seriousness of our proposals. ”

“What I kept is that not everything has been decided. We will present ideas, and if we can weigh in, we will do it, “he was quoted as saying by AFP.

Dion, who felt targeted by Macron on Friday, fired back with an open letter in the daily Le Monde on Saturday, reminding the president of his promises.

For this democratic initiative to work, it is important that you commit yourself to addressing the proposals that follow from the citizens’ deliberations’ as they are ‘in order to hand them over to the French people or to Members of Parliament. For a simple reason. For several years, politicians organized “participatory democracy” which was a hoax. Citizens are consulted and then very often elected representatives do nothing. Experts are appointed, work hard … and then their recommendations are ignored, rolled up, weakened, “he wrote.

‘Something green, something brown’

Cécile Duflot, director general of Oxfam France, claimed on Monday that France was not doing enough to protect the environment and said that the public quarrel between Macron and Dion was not what would promote things.

“These are not words that will change anything,” Duflot, former head of EELV, told France Inter radio.

“There have been many missed opportunities. Nicolas Hulot [who served as environment minister at the beginning of Macron’s presidency] resigned for that very reason. Before the carbon tax was approved, he warned that social compensation would be necessary otherwise it would not pass, she said.

The Citizens’ Convention on Climate Change was originally set up as part of the government’s efforts to quell the “yellow vests” against government protests that erupted in response to Macron’s carbon dioxide tax on diesel.

“French politics in recent years has been something green and something brown,” Duflot said. “When we subsidize fossil fuels but at the same time make certain policies that go in the right direction, in the end we stick to the same point,” she added.