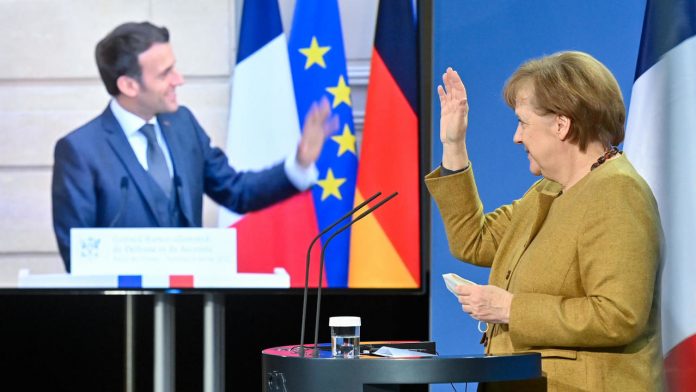 “I fully support the European strategy,” Macron told an online news conference after talks with Merkel. “What would people say about countries like France and Germany competing with each other for vaccines?”

“It would be a mess and counterproductive,” he said.

Merkel said that although the sluggish expansion showed that the bloc needed to increase drug production capacity, “the basic decision to order together as the European Union was and is right”.

Anger in the 27-member bloc has increased in recent weeks over the slow pace of coronavirus vaccination compared to the faster campaigns in the US, Israel and former EU member UK.

‘Work as fast as possible’

Merkel has taken the airwaves several times this week to defend Germany’s decision not to go alone.

She said the EU and vaccine manufacturers were “working as fast as possible” to speed up vaccinations and expand production lines.

The EU has ordered more than enough potential vaccines for its 450 million citizens, she said, but initial shortcomings have revealed that the bloc’s “production capacity is not as large as we had imagined”.

“But producing vaccines is not something that can be done overnight,” Merkel added. “These are complicated processes.”

Macron said the bloc had secured doses from a wide range of vaccine candidates, but acknowledged that leaders had been monitored by the rapid success of experimental mRNA vaccines.

Jabs, based on new technology never before used in a commercial vaccine, were developed by Pfizer / BioNTech and Moderna and became the first two shots approved by EU regulators in the fight against the pandemic.

“No one could have known we would have safe vaccines so quickly,” Macron told reporters.

Macron also said that France and Germany are striving to take the next step in the development of Europe’s next-generation fighter jets in the coming weeks by confirming contracts to build a test version.

“We are moving forward, it is an extremely complex project,” says Macron.

“In the coming weeks, we will have settled the final outstanding points and I really hope that by spring we will have the administrative and political confirmations needed to meet our schedule and our ambitions,” Macron said.

The Future Combat Air System (FCAS), built by German, French and Spanish companies, is an important part of Macron’s pursuit of military sovereignty on the continent and its goal of reducing its dependence on the NATO alliance.

To date, governments have only approved funding for prototype and design contracts, a small part of the multi-billion euro budget for the 20-year project.

Signing a contract for the next study would involve a € 1 billion ($ 1.2 billion) commitment to build the demonstrator plane, which is expected to cost € 6 billion alone, a source close to the project told AFP.

Both Macron and Merkel want to give the green light before the German elections in September and the French presidential race next year, as this would reduce the risk that a new government could scrap the project.

But Merkel still said there were still “lots of questions to clarify” about the division of labor between French and German companies.

Airbus and France’s Dassault Aviation are at the forefront of the plane’s development, along with France’s Safran and Thales, the German engine manufacturer MTU and the European missile company MBDA.

“We realize that the project is led by the French, but it should be a project in which both countries play equal roles,” she said, sparking talks with Macron about the division of intellectual property between the companies.

The new stealth delta-wing jets, which will replace the current generation of Rafale and Eurofighter jets, will be operational in 2040.