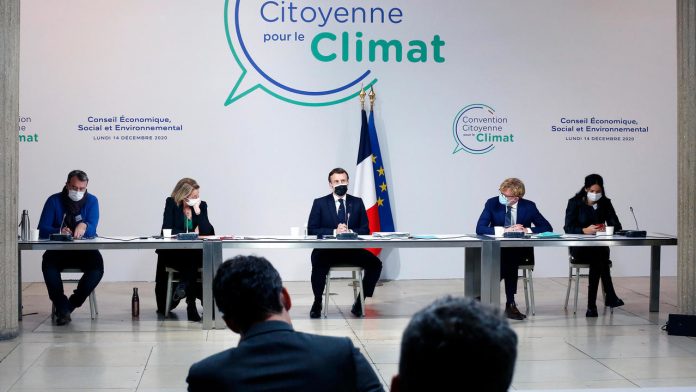 A Citizens’ Council on Climate Change met for the last time this weekend to finalize proposals on climate change laws aimed at rapidly transitioning to a greener economy and anchoring the fight for climate change in the French Constitution. While some see President Emmanuel Macron’s citizens’ panel as a welcome precedent and a model for more direct democracy, others say it has been filled with disappointment and frustration.

After nine months of research and careful debate, some complicated ones, Citizens’ Council on Climate Change (CCC) convened for a three-day conference on Friday to prepare its final speech to the French government on how to reduce CO2 emissions.

Macron first formed the CCC to advise on climate reforms at the end of the “Yellow Vest” crisis in 2019 in response to demands for greater “direct democracy”. The randomly selected group of 150 French citizens, or “150” as they came to be called, were tasked with finding ways to quickly move France towards a greener economy. Its mission in a nutshell: to reduce greenhouse gas emissions by 40 percent (compared to 1990 levels) by 2030.

Two of the most important recommendations are a ban on “ecocide” and the inclusion of the fight against global warming in the French Constitution. The 150 – who reviewed reforms in six main areas including consumption, production, labor, travel, housing and governance – had submitted 149 proposals in October last year. Only three were rejected.

The measures have been included in two bills, the bill “Climate and resilience” and a separate constitutional bill. Some of the citizens’ recommendations include a ban on advertising for fossil fuels, restrictions on short-haul flights on domestic flights if other modes of transport are available, and a ban on nitrogen and other pollutants used in agriculture. While the bill will be debated by MPs and government ministers in the National Assembly at the end of March, many of the citizens who met for the last of a three-day video conference on Sunday have already expressed some frustration and disappointment.

A citizen named Benoît told the regional daily Ouest France that he did not expect the measures proposed by the citizens’ council to be of great importance to the government in the end.

His opinion is shared by environmental groups and other citizens in the Council who have pointed the finger at measures taken to discard some previous measures and water down others.

The High Climate Council, an independent body, on February 23 criticized the recovery plan, changes to green energy in buildings and other parts of climate legislation, which they said lacked ambition and the space needed to reduce greenhouse gas emissions.

Cyril Dion, a French film director, actor, writer and environmental activist originally appointed by Macron to help oversee the civic group, launched a scathing public attack on the president, accusing him of breaking his promise to accept proposals “without filter”. or change them.

He launched an online petition in late 2019 to “save the convention” which received over 350,000 signatures in two weeks and wrote an open letter to the French daily Le Monde to remind the president of his promises.

For this democratic initiative to work, it is important that you commit yourself to taking up the proposals that follow from the citizens ‘deliberations’ as they are ‘and handing them over to the French people or to the Members of Parliament … For years organized politicians’ participatory democracy ‘which was a scam. Citizens are consulted and then very often elected officials do nothing. Experts are appointed, work hard … and then their recommendations are ignored, rolled up, weakened, “he wrote.

Macron fired back in an interview with the French online media outlet Outlet Brut and said “these are not questions we can say ‘Take it or leave it’ – it’s wrong”. He added that the state should not consider the climate proposals of 150 citizens as inviolable as the “Bible or the Koran”.

Some say that Dion’s criticism was justified. According to Hélène Landemore, professor of political science at Yale University and author of the book “Open Democracy: Reinventing Popular Rule for the 21st Century,” the president promised “too much when he talked about sending citizens’ proposals without filtering” “directly into a referendum or parliamentary debate.

It has also provided Macron’s political rivals with ample ammunition. MEP François-Xavier Bellamy of the right-wing party Les Républicains said the president had taken a “populist turn” with the CCC, saying it lacked legitimacy.

“Has representative democracy become so discredited that we now believe that 150 randomly selected people working in a closed room are enough to make proposals that are really similar to what the French people want?” he asked during an interview on Sud Radio in June 2019. “I do not think so,” he added.

By embracing citizens’ panels, Macron has gone where previous presidents have feared trampling. He is probably the first French leader to entrust French citizens with the serious political process – and on an issue as controversial and significant as climate change.

Unlike other citizen panels

Armel Le Coz – co-founder of Démocratie Ouverte, a French NGO that drafted the protocols for the CCC – says the concept of the council was to “try to imagine a new form of predominant democracy”.

“The Citizens ‘Convention on Climate Change is very different from other citizens’ panels,” Le Coz explained. “First, it was overseen by the president. Second, while previous governments have required citizens’ participation in issues such as genetically modified organisms (GMOs), nuclear waste and vaccines, these initiatives were purely advisory and were always led by ministries or other government institutions. ”

He said the CCC has shown that French citizens with different backgrounds “can formulate ambitious and realistic proposals on a complex subject with high contributions to society”. In the future, he sees civic conventions becoming a daily function of French institutions with the power to trigger referendums and bills.

And while acknowledging that some participants found fault in the process, he attributed their complaints to the fact that the CCC is chartering new political territory.

Landemore agrees that Macron took a “political risk” but says he was probably convinced of the benefits of moving forward with the Landmark Citizens’ Convention following the success of the country’s major national debate, which was launched in response to Yellow West protests and included 21 advisory groups for national.

Although the president has managed to steer the government toward an ecological course, Landemore sees challenges from an institutional culture with a lack of appetite for radical political change.

“The problem I see is that it is one thing to have the discourse and the ambitions, another to have the right institutional culture to deliver. Regardless of Macron’s own sincerity, there are too many people who pull their feet, roll their eyes and pursue a different agenda. “

Although it is unlikely that the draft emission reduction target will be achieved, Landemore believes that the CCC’s legacy “will be much broader and longer lasting than the current disappointing mood suggests”.

“We are in the early stages of experimenting with civic assemblies,” she said. “I understand the disappointment of some in the CCC right now, but it is not a complete failure either – they fulfilled their mandate and delivered a coherent set of proposals.”

The real test, she says, will be whether it succeeds in getting a referendum on adding a preamble to the constitution.

“Now it would be a symbolically important victory.”