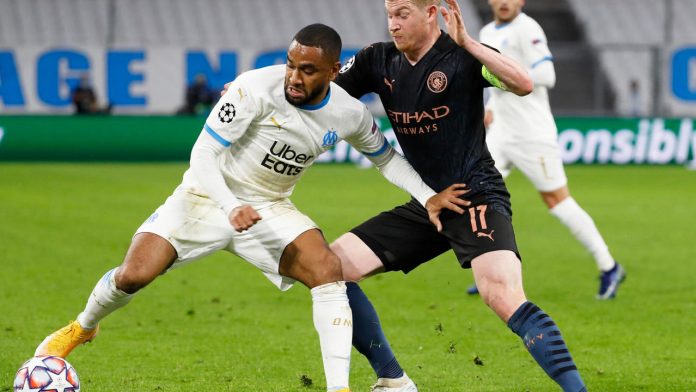 Manchester City won two wins from two in their latest bid for Champions League glory when Kevin De Bruyne played in a straight 3-0 win over Marseille on Tuesday.

The English side, who have never reached the semi-finals under Pep Guardiola, sit at the top of the early Group C table following their opening win in Porto last week.

The City boss said his team have to accept the latest criticism after winning just two of their five Premier League matches so far this season, but that he was confident they could put together a strong race after their performance at the Stade Velodrome.

“Part of the criticism was right, but you have to accept it. It’s part of our job,” Guardiola told BT Sport.

“It’s about where we’re come from in the last month, with a lack of preparation, injuries and Covid-19, but the Champions League is a good place now.

“I’m sure we’ll find that consistency … I’m so happy with the way we played.”

When De Bruyne ran the show in midfield at his first start since returning from injury, City drove past a largely inefficient Marseille.

Andre-Villas Boas’ men, playing in their first Champions League campaign since 2013, are rooted to the group’s foot after back-to-back defeats.

The former Chelsea and Tottenham coach cut an agitated figure in his post-match press conference and hit journalists who criticized his decision to start with five defenders.

“Lorient (who Marseille beat on Saturday) and City are not the same,” he said. “You start criticizing all the choices I make.

“City is city – spent over a billion (euros) for years to build this team. They have a coach who is a phenomenon …

Porto sit second behind City after a 2-0 win over Olympiakos in Group C’s second match on Tuesday and host Marseille next week.

“It’s another level, you have to be honest,” Marseille winger Florian Thauvin told RMC Sport.

“We have to learn from these struggles, we have to improve.

“The Porto match is a last chance match. We have to do better, it’s the Champions League. It’s been seven years since we participated, we all have to learn together.”

City started with Ferran Torres in front in the absence of the injured duo Sergio Aguero and Gabriel Jesus.

The visitors dominated the early stages without creating many clear chances, but were handed the opening goal in the 18th minute.

Marseille midfielder Valentin Rongier’s terrible pass put De Bruyne in the clear and the Belgian squared for Torres to place his third City goal since signing from Valencia.

City probably seemed to win without the help of their opponents, but Marseille defender Leonardo Balerdi constructed to lose the ball inside his own area and was lucky to see Oleksandr Zinchenko’s effort cut the bottom of the post.

However, the website improved a lot after the interval, and City goalkeeper Ederson was lucky to fumble a long-range strike from Thauvin on his post and behind.

But any hope of a push for a late OM equalizer was put to bed 14 minutes from time.

Phil Foden stood a high ball up to the back post, which Raheem Sterling nodded for Ilkay Gundogan to score.

It was not long before De Bruyne gathered his second assistant in the game as his low pass was tapped home by Sterling.

Wales draw with Switzerland, powerful Belgium takes on the battle

hanad - June 12, 2021
Danish midfielder Christian Eriksen collapsed during play and was resuscitated by medics on Saturday during his side's Euro 2020 match with Finland, interrupting the...