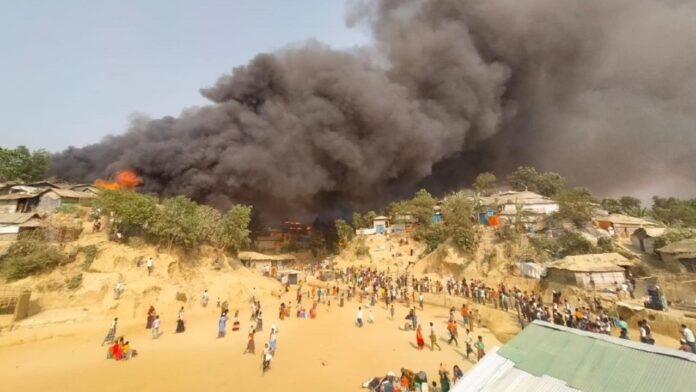 Five people are feared dead and at least 20,000 Rohingya have fled a huge fire that encircles small homes at refugee camps in southeastern Bangladesh, officials said Monday in the third fire that struck settlements in four days.

Nearly one million of the Muslim minority from Myanmar – many of whom fled a military attack in their home country in 2017 – live in cramped and difficult conditions at the camps in Cox’s Bazar district.

Officials said the fire apparently started in one of the 34 camps – which span 8,000 hectares (3,237 hectares) of land – before spreading to three other camps, with refugees fleeing the shanties with whatever they could carry.

Thick columns of smoke could be seen wafting from flaming cousins ​​in video shared on social media, as hundreds of firefighters and aid workers fought the flames and dragged the refugees to safety.

“We put out the fire in one place and it is spreading to other places.”

Gazi Salahuddin, a police inspector, said the fire was extinguished at midnight and officers have heard that five people including three children and two women have died from the fire.

“We heard that five people have died from the fire and that their bodies are in the camps,” Salahuddin told AFP, adding that police could not issue a statement unless they had recovered.

Salahuddin said the fire was very small and confined to a narrow strip, but it grew and ran to other camps after gas cylinders used for cooking exploded.

Officials told AFP that a preliminary assessment showed that more than 900 shanties – home to about 7,400 refugees – had been cleared, with the flame still burning.

Mohammad Yasin, a Rohingya who helps with the firefighting, told AFP that the flame erupted for more than ten hours after it started and was the worst he has seen since 2017.

A Save the Children volunteer, Tayeba Begum, said that “people screamed and ran here and there (and) children also ran scattered and cried for their family”.

It was the third fire that hit the camp in four days, the fire brigade official Sikder, who only goes by one name, told AFP.

Two separate fires in the camps on Friday destroyed many shanties, officials said at the time.

Sikder said the cause of the fires was not yet known.

Amnesty International’s campaign for South Asia, Saad Hammadi, tweeted that “the frequency of fires in the camps is too coincidental, especially when the results of previous investigations into the incidents are not known and they continue to be repeated”.

Massive fire reportedly spreads over #Rohingya refugee camps 8E, 8W, 9, 10 and 11 in Balukhali. The fire frequency in the camps is too coincident, especially when the results of previous investigations of the incidents are not known and they continue to be repeated. pic.twitter.com/nBbeq7NRCH

Meanwhile, the government has been pushing for the refugees to move to a remote island in the Bay of Bengal, saying the camps were too cramped.

To date, 13,000 Rohingya have been relocated to the flood-prone island that critics say is in the way of deadly cyclones.