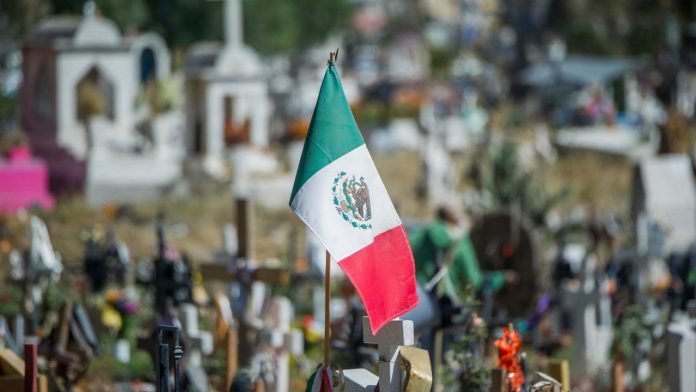 Mexico said on Thursday that the number of coronavirus deaths had risen to over 100,000 and became the world’s fourth country to pass the dismal milestone.

“Today, we have 100,000 people in Mexico who have lost their lives because of Covid-19,” Deputy Health Minister Hugo Lopez-Gatell told a news conference.

The Ministry of Health announced 576 more deaths in its daily update, which totaled 100 104, behind the United States, Brazil and India alone.

The total number of registered infections is now 1,019,543 in a nation of more than 128 million, an increase of 4,472 compared to the previous day.

While the number of daily infections has begun to rise again in recent weeks, authorities say deaths are still on a downward trend.

“There are infections, but fortunately … there are fewer deaths and that is the goal,” President Andres Manuel Lopez Obrador said this week.

But Malaquia’s Lopez, an epidemiologist and former health ministry official, said it was unclear whether the situation would improve.

“We are at a point where we do not see a clear descent phase. We do not know where it goes, he tells AFP.

The government says poor eating habits and health problems, including obesity, high blood pressure and diabetes, are partly to blame for the high number of deaths.

“These conditions increase the risk of a patient dying, it’s true, but in Mexico they are almost death sentences,” said Lopez, who believes authorities have used risk factors to divert criticism of their handling of the pandemic.

Half of Mexico’s workforce is in the informal sector and if they become ill, they cannot afford to self-isolate, he said.

The government says the high number of deaths reflects its large population.

In terms of deaths per 100,000 inhabitants, Mexico ranks 11th worldwide, based on official data.

Authorities acknowledge that the actual number of coronavirus deaths is higher than the official toll due to the low test level.

Luis Vargas, a doctor who works at a coronavirus test site in Mexico City, said people recently seemed to get more nervous because a relative or friend had contracted the virus.

He fears that many shoppers neglected to follow sanitary measures during the country’s equivalent of Black Friday sales this month.

“I think the number of cases will increase,” he said.

Eighteen-year-old Aaron Romero, who was waiting to be tested and has symptoms of Covid-19, said his family had agreed not to meet at Christmas this year.

“It’s weird and difficult, but it’s the best,” he said.