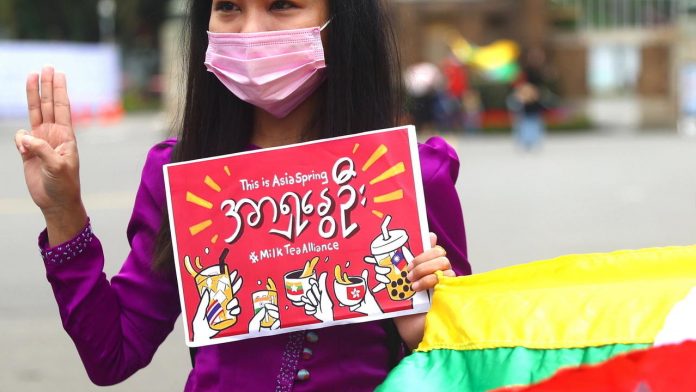 Activists across Asia rallied on Sunday to support protesters in Myanmar fighting a military coup, showing the growing influence of cross-border youth movements pushing for democracy with the “Milk Tea Alliance” rally.

Following a call for help from Myanmar’s pro-democracy campaigns, about 200 people in Taipei and dozens in Bangkok, Melbourne and Hong Kong took to the streets waving #MilkTeaAlliance signs and flags.

The hashtag, which originated as a protest against online attacks by nationalists in China, was used millions of times on Sunday. The name comes from the shared passion for the milky drink in Thailand, Hong Kong and Taiwan.

Activists in Indonesia and Malaysia staged protests online and thousands of others, from Southeast Asia and elsewhere, took part in a social media campaign and published messages and works of art.

The rallies in Asia took place on the bloodiest day of weeks of demonstrations in Myanmar, after police fired demonstrators, including in the country’s largest city Yangon, where some activists held their own “Milk Tea Alliance” signs.

At least 21 protesters have been killed since the military seized power and arrested elected leader Aung San Suu Kyi and much of her party leadership on February 1.

“When we see brave people in Myanmar take to the streets, drop the water cannon, tear gas, batons and bullets, painful memories move,” said Debby Chan, a researcher between China and Myanmar who participated in a Hong Kong rally on top of the city’s landmark Lion Rock.

“Hong Kong protesters also suffered from this in 2019,” she said. “Today we want to show our solidarity.”

Campaigns in Hong Kong climbed the small mountain and held # # MilkTeaAlliance signs demanding an end to the dictatorship in Myanmar.

“Myanmar’s activists have been very active in joining the Milk Tea Alliance since the coup,” said Thai activist Rathasat Plenwong, who showed support for Myanmar’s protests in Bangkok on Sunday. “We feel like we’re in this together.”