Home NEWS More than 10,000 have been detained at pro-Navalny meetings in Russia, the...
Facebook
Twitter
WhatsApp
Linkedin
LINE 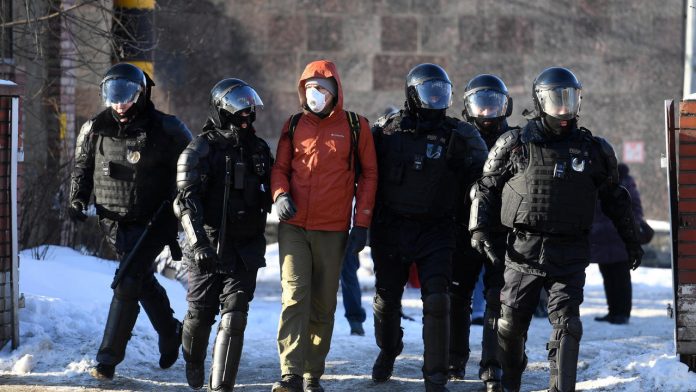 More than 10,000 people have been detained at recent rallies in Russia in support of Kremlin critic Alexei Navalny, a protest monitor said on Wednesday, adding that many of them had also been beaten while in police custody.

Navalny urged Russians to take to the streets after he was detained last month on arrival in Moscow from Germany, where he had recovered from poisoning with a Soviet-designed nerve agent.

Hundreds more filled the streets of the capital Moscow on Tuesday night, after Navalny, 44, was sentenced to two years and eight months in prison for violating the terms of a 2014 conditional sentence for embezzlement, which he claims was a pretext to silence him. .

At nationwide gatherings over the past two weeks, more than 10,000 people were arrested by the police, says the OVD-Info group, which monitors the opposition’s protests in its report released on Wednesday.

Russia’s Journalists’ Union, meanwhile, said more than 100 journalists were either injured or detained at the rallies.

Detainees are being held for hours “in horrific and stuffy conditions, without food or the opportunity to use a bathroom,” OVD-Info analyst Grigory Durnovo told Ekho Moskvy radio.

He added that lawyers from the group, which provides free legal aid to detained protesters, sometimes did not have access to detention centers.

Later on Wednesday, a Russian court sentenced Sergei Smirnov, editor-in-chief of Mediazona, an online news publication that is often critical of the government, to 25 days in prison for re-tweeting.

Ahead of a January 23 protest in Navalny’s support, Smirnov, 45, tweeted a joke that included the time of the protest rally.

An analyst working for OVD-Info, Grigory Durnovo, told AFP that many of the detainees had been subjected to “difficult conditions” in custody and that authorities purposefully carried out “hard detention”.

On Tuesday, the head of Russia’s investigative committee, which is investigating major crimes, ordered checks on detained men to see if they had avoided military service, which in Russia is mandatory for a year.

Navalny’s arrest and the violent police have been condemned by international rights groups and Western governments, including the United States, Britain and France.

On Wednesday, Germany reiterated its call for the release of Navalny, saying more EU sanctions against Russia “could not be ruled out”.

The UN Human Rights Office called for the release of detainees who had been detained “for exercising their right to freedom of peaceful assembly and expression”.