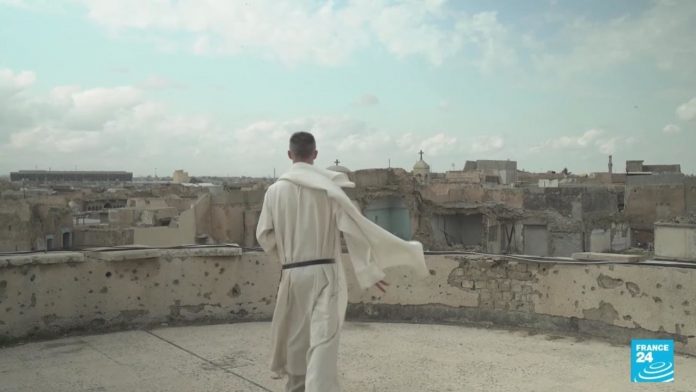 In connection with Pope Francis’ visit to Iraq, which began on Friday, Jowharwent to meet Christians across the country: from Baghdad to Erbil, via Mosul and Qaraqosh. This section looks at the predominantly Sunni Muslim city of Mosul, which Francis will visit on Sunday. The city’s strong Christian heritage was destroyed in the city during the war against the Islamic State group.

Mosul is a majority Sunni Muslim city, but its rich Christian history can still be seen in some of the city’s buildings.

During the city’s occupation by the Islamic State group from 2014 to 2017, its churches were looted, desecrated and destroyed.

“The crosses have been removed. But … the domes are still standing. We’re lucky, that’s what we said to ourselves, compared to other churches, we did well, for Daesh [Islamic State] used this place, which allowed us to find it quite damaged but not destroyed, says Father Olivier Poquillon, a French Dominican and head of the Al Saa’a Church in the heart of Mosul’s ancient city.

Emblems of the Islamic State group remain, a legacy that some are working to remove before the pope arrives.

“Some Christians do not intend to return because they are afraid. There is cohabitation here, much like it was before 2003,” said Sabah Aziz Ibrahim, guardian of Al Saa’a Church. He is one of several dozen Christians living in Mosul today, far from the 45,000 who lived in the city before 2003.