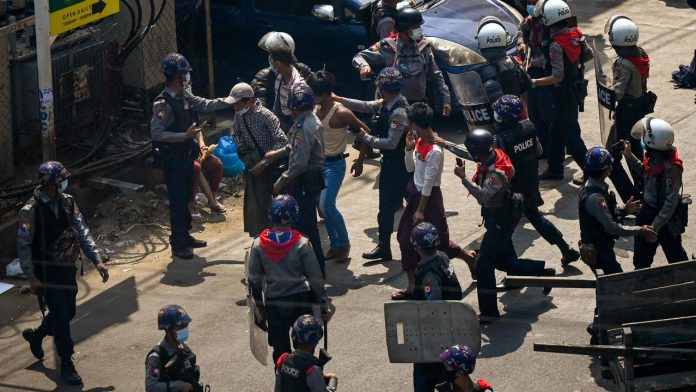 Myanmar police fired rubber bullets to disperse protesters in Yangon on Saturday, according to an AFP reporter, after the country’s ambassador to the UN broke up the trail to make an emotional call for action against the military junta.

The country has been shaken by a wave of democracy protests since a military coup overthrew civilian leader Aung San Suu Kyi on February 1.

It was unclear if any live rounds were used when police chased protesters and journalists from the Myaynigone intersection.

There had been an hour-long shutdown on Friday at the same location.

Hundreds of ethnic moon protesters gathered there on Saturday to celebrate Monday’s national day, along with other ethnic minority groups to protest the coup.

The police came to clear the intersection and chased protesters and journalists ran to hide in nearby buildings.

Three journalists were among those arrested on Saturday.

“What are the police doing? They’re protecting a mad dictator, the protesters chanted.

They spread to smaller residential streets and began building makeshift barricades of barbed wire and tables to stop the police.

Local reporters broadcast the chaotic scenes live on Facebook, including the moments when the shots ran out.

“We will try to find another way to protest – of course we are afraid of their opposition,” said protester Moe Moe, 23, who used a pseudonym.

“We want to fight until we win.”