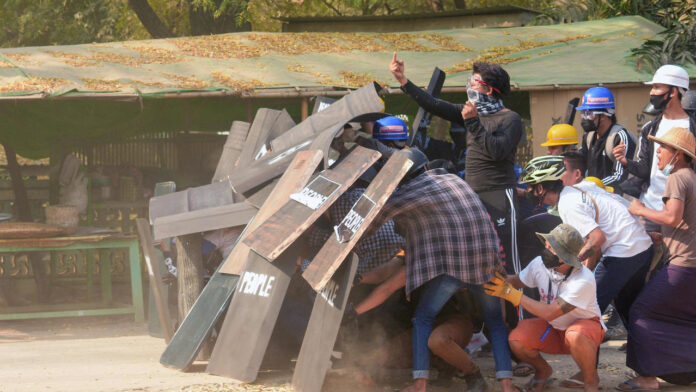 The country has been in chaos since the coup on February 1, which released civilian leader Suu Kyi from power and sparked a mass uprising against the junta military regime.

Wednesday was the deadliest day so far, with the UN saying at least 38 people were shot dead when security forces fired on the crowds and shot some protesters in the head.

The UN Office for the Coordination of Human Rights also said it had verified at least 54 deaths since the coup – although the actual number could be much higher – and more than 1,700 people had been detained.

Suu Kyi’s National League for Democracy Party confirmed that some officials were arrested in overnight races.

“It is true that in some townships NLD officials were arrested. But we do not know exactly how many people were arrested or arrested,” party leader Soe Win told AFP.

NLD parliamentarian Sithu Maung posted on Facebook that the security forces last night searched for the party’s information officer U Maung Maung in his house but could not find him.

“U Maung Maung’s brother was beaten by police and soldiers and his body was held upside down while he was tortured because there was no one to arrest,” the MP said.

State media on Sunday warned lawmakers involved in a group – called the committee representing Pyidaungsu Hluttaw, which claims to be the legitimately elected government in Myanmar – that they are committing “high treason” and could be sentenced to death or 22 years in prison.

The junta has declared that group members are persona non-grata and says that those who communicate with them can receive seven years in prison.

Yangon-based activist Maung Saungkha flagged that protests were coordinated in several cities and regional areas on Sunday as part of a two-day general strike.

“We are willing to die for our country,” he told AFP.

“The current situation is worse (than the previous regime). So are we staying under this condition or are we fighting? This time we have to fight to win. We believe that fighting together with the young generation will give us the victory.”

On Saturday, state media announced that if officials continue to boycott work, “they will be fired” with immediate effect from March 8. The junta is pushing for the banks to reopen on Monday.

But protesters insist they will continue to defy authorities for the next two days.

In Yangon’s northern Okkalapa township, protests took on a musical flavor with guitarists and drummers and singers wearing Suu Kyi t-shirts and singing revolutionary songs at an impromptu concert.

While thousands of crowds took to the streets of Mandalay – Myanmar’s second largest city – chanting: “Do not serve the military, go out, go out.”

Many sat on roads under umbrellas with signs saying “liberate our chosen leaders”.

That city lost another life on Saturday, according to the Assistance Association for Political Prisoners, which reported that a 21-year-old Ko Naing Min Ko died after being shot in the leg and beaten by security forces the previous day.

The monitoring group also said that people linked to the military-backed Union Solidarity and Development Party were responsible for two deaths on Saturday morning in the Magway region – a 17-year-old youth and an NLD party official.

At the same time, many Myanmar citizens are on the border with India, waiting to join about 50 others who have already crossed the border to escape the country’s coup d’état, Indian officials said on Saturday.

Myanmar authorities have written to their Indian counterparts requesting that eight police officers who fled this week be sent home.

“At least 85 Myanmar civilians have been waiting at the international border to enter India,” the official added, speaking on condition of anonymity.