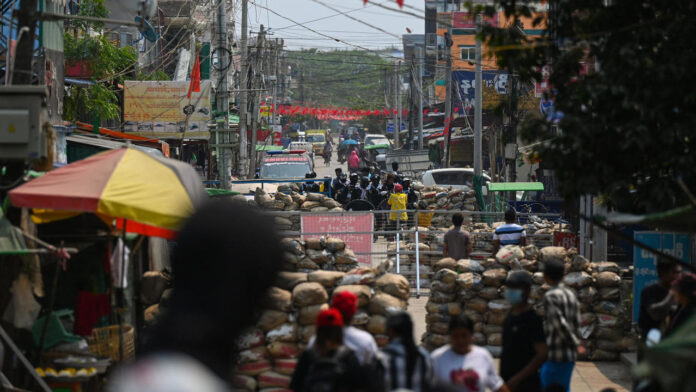 Myanmar security forces opened fire on anti-coup protesters in the commercial capital Yangon on Sunday, killing at least three people, witnesses and local media said. Meanwhile, civilian leader Mahn Win Khaing Than, who is on the run with most of the country’s senior officials, urged the people not to give up their fight.

The video taken at the scene showed protesters holding handmade shields and wearing helmets as they confronted security forces in the Hlaing Tharyar district. Mushroom plums rose all over the area and a report said two factories in the district had been set on fire.

At least two people were killed elsewhere in the Southeast Asian nation, a day after the acting leader of the parallel civilian government said it would try to give people a legal right to defend themselves.

A young man was shot and killed in the city of Bago, near Yangon, witnesses and domestic media said. The Kachin Wave media outlet said another protester was killed in the town of Hpakant, in the jade mining area in the northeast.

More than 80 people had been killed since Saturday in widespread protests against the military’s takeover last month, the Assistance Association for Political Prisoners said. More than 2,100 people have been arrested, it is said.

Mahn Win Khaing Than, who is on the run along with most senior officials from the ruling National League for Democracy Party, spoke to the public via Facebook on Saturday, saying, “This is the nation’s darkest moment and the moment when dawn is over.”

He said the civilian government would “try to legislate the laws required so that the people have the right to defend themselves” against the military operation.

Monywa township in central Myanmar declared that it had formed its own local government and police force.

In Yangon, hundreds of people demonstrated in different parts of the city after putting up barricades of barbed wire and sandbags to block security forces.

In one area, people staged a sit-in protest under tarpaulins rigged up to protect them from the harsh midday sun. “We need justice,” they chanted.

At least 13 people were killed on Saturday, one of the bloodiest days since the coup on February 1, witnesses and domestic media said.

“They are acting as if they are in a war zone, with unarmed people,” said an activist in Mandalay, Myat Thu.

A spokesman for the junta did not respond to phone calls from Reuters for comment. Junta-driven media MRTV’s evening news broadcast on Saturday called the protesters “criminals” but did not elaborate.