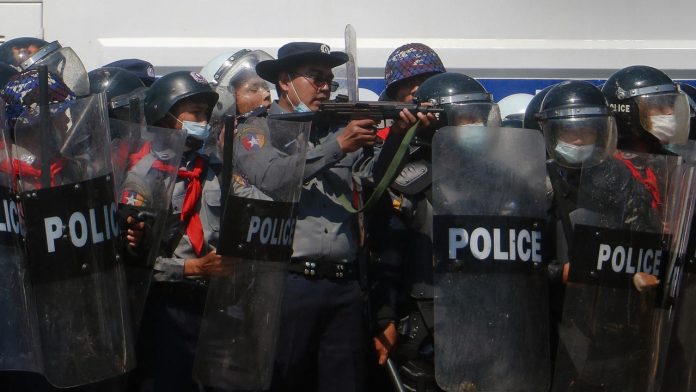 The latest attack on Myanmar’s civilian leadership turned into anger over last week’s coup and the generals’ detention of Suu Kyi has driven hundreds of thousands of people to the streets in recent days and defied a junta ban on rallies.

“The military dictator raided and destroyed the NLD headquarters around 9.30pm,” the National League for Democracy announced on its Facebook page.

The raid came after demonstrations broke out on a fourth straight day on Tuesday, with police using water cannons in several cities, firing rubber bullets at protesters in the capital Naypyidaw and firing tear gas into Mandalay.

The meetings came despite a warning from the junta that it would take action against demonstrations that threatened “stability” and a new ban on gatherings of more than five people.

In Naypyidaw, the remote capital built by the former military regime, witnesses said police fired projectiles at protesters after blasting them earlier with water cannons.

“They fired warning shots at the sky twice, then fired (at protesters) with rubber bullets,” a resident told AFP.

At least one emergency doctor said the military also used live rounds, leaving a 23-year-old man and 19-year-old in critical condition in hospital.

“We think they are actual bullets because of the wounds and their injuries,” the doctor said.

“We do not operate on their wounds because they can die immediately – we are 100 percent sure that they will die if we operate – that’s why we look at their condition by treating them medically.”

The father of one of the victims said his son had been shot “while trying to use the megaphone to ask people to protest peacefully after police used water cannons to disperse them.”

“He was hit in the back … I’m very worried about him,” the 56-year-old goldsmith told AFP.

A witness, who declined to be named for fear of the authorities, said she gave protection to about 20 of the protesters and offered them water, towels and fresh face masks.

As night fell, the UN expressed its “strong concern” over the violence.

“The use of disproportionate force against protesters is unacceptable,” said Ola Almgren, the UN’s coordinator and humanitarian coordinator in Myanmar.

‘We only have one life’

Earlier this week, hundreds of thousands of protesters appeared to have shaken the military, with junta chief General Min Aung Hlaing giving a televised speech on Monday to justify seizing power, citing allegations of fraud.

The army also announced a curfew and a ban on protest rallies.

But on Tuesday, new demonstrations broke out in Yangon, including near the NLD’s headquarters.

The protesters carried placards, some of which read “We want our leader,” referring to Suu Kyi and “No Dictatorship.”

In the afternoon, thousands had gathered in the neighboring Kamayut area, wearing umbrellas and wearing raincoats when they met the police, who had water cannon cars that prevented protesters from marching forward.

“Obviously we are worried (about a force),” said protests Khin Thida Nyein, a teacher. “We only have one life but we are still coming out …. because we are more worried about our children’s future.”

Protesters dispersed at night without any reports of collisions with Yangon authorities.

At the same time, civil aviation workers and air traffic controllers have joined a civil disobedience movement, with their strike to affect international flights that want to pass through Myanmar’s airspace.

It will also hit the military government’s coffers, which will lose overflight fees paid by airlines that can be worth up to $ 182,000 a day.

“Without us, they can no longer get the money,” an air traffic controller told AFP.

The NLD won the national election in November last year, but the military never accepted the results.

It has issued a state of emergency for a year and promised to hold new elections after that.

My Aung Hlaing insisted on Monday that the military follow its promises and reinstall democracy. He also explained that things would be different from the army’s previous 49-year reign, which ended in 2011.

On Tuesday, New Zealand became the first foreign government to take concrete public action and announced the lifting of high-level military and political contacts with Myanmar.

The United States has led global calls for generals to relinquish power and issued a new statement on Monday with the country’s former name saying “with the people of Burma.”

State Department spokesman Ned Price also said that the US request to talk to Suu Kyi had been denied.

The UN Human Rights Council said it would hold a relatively rare special session on Friday to discuss the crisis.

Meanwhile, relatives of an Australian economic adviser told Suu Kyi that they were “outraged” by his detention.

Macquarie University professor Sean Turnell was the first foreign national to be confirmed arrested by the new junta.

Australian Foreign Minister Marise Payne has called in Myanmar’s ambassador on the matter.