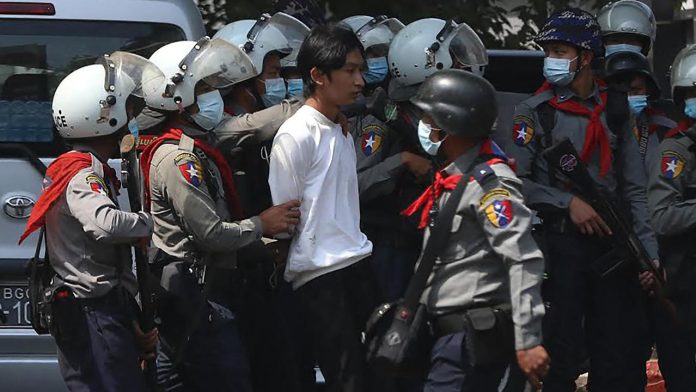 On Friday, security forces in Myanmar’s largest city fired warning shots and struck truncheons against their shields as they moved to disperse more than 1,000 anti-coup protesters.

Protesters had gathered in front of a popular shopping mall in Yangon, with placards and shouting slogans condemning the coup on February 1, even as security presence increased and a water cannon was taken to the area.

As about 50 riot police opened fire on protesters, warning shots were fired and at least one protester was held by officers. Security forces chased the protesters off the main road and continued to pursue them in nearby lanes, as some entered houses to hide.

The confrontation underscored the growing tensions between a growing insurgency and Myanmar’s generals that overthrew the elected government of Aung San Suu Kyi in a takeover that shocked the international community and turned years of slow progress toward democracy.

On Thursday, supporters of Myanmar’s junta attacked people protesting against the military government and using slingshots, iron rods and knives to injure several of them. Photos and videos posted on social media showed groups attacking people in central Yangon while police were intervening.

>> Citizens’ journalists document responses to protests against coups in Myanmar

Violence erupted as hundreds marched in support of the coup. They carried banners in English with the slogans “We stand with our defense services” and “We stand with the State Administration Council”, which is the junta’s official name.

Late Thursday, police showed up in Yangon’s Tarmwe district, trying to clear the streets of residents protesting the military’s appointment of a new department administrator. Several arrests were made when people dispersed in front of riot police who used grenades to disperse the crowd.

In Mandalay, the country’s second largest city, anti-coup protesters also took to the streets on Friday. They included a contingent of Buddhist nuns who had placards reading “We need immediate action by force from the US Army.” Other protesters carried signs reading “Free our leader Aung San Suu Kyi”, “Pray for Myanmar” and “Reject military coup.”

By noon, security forces had blocked the main road in central Mandalay to prevent the protesters from gathering.

Suu Kyi has not been seen since the coup. About 50 of her followers held a prayer on Friday opposite their home in Yangon. The wandering mansion on University Avenue is where she spent many years under house arrest under previous military governments, and the residence has long had iconic status among her followers.

“Because of the situation, we are sending this day of the full moon love to and reciting the Buddha’s teachings for Mother Suu, President U Win Myint and all those who are being held illegally,” said Hmuu Sitt yan Naing, who joined the prayer group.

It is believed that Suu Kyi is currently being held in the capital Naypyitaw. She will face a court on Monday on charges against the military junta against her that are generally seen as politically motivated.

Several Western countries have imposed or threatened sanctions against Myanmar’s military. On Thursday, Britain announced further action against members of the ruling junta for “monitoring human rights violations since the coup.”

In the midst of the international outrage, Facebook also announced on Thursday that it would ban all accounts linked to the military as well as ads from military-led companies.