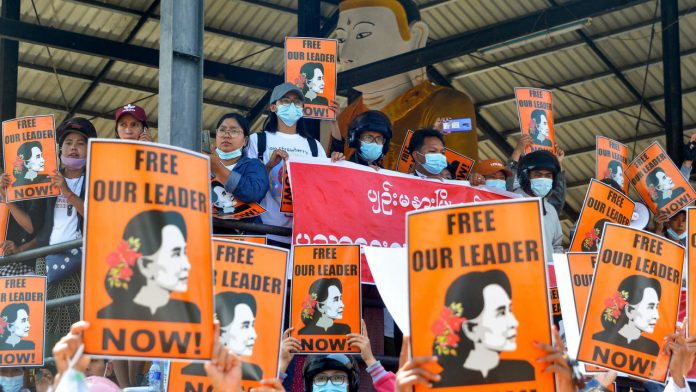 A Myanmar court has filed a new indictment against fired leader Aung San Suu Kyi on Monday, a lawyer who acted for her said as protesters marched in defiance of security forces who killed at least 18 people the previous day.

Suu Kyi, 75, looked healthy when she attended a court hearing via video conferencing in the capital Naypyitaw, but may have lost weight, and she asked to meet with her legal team, lawyer Min Min Soe told Reuters.

She has not been seen in public since her civilian government was overthrown in a military coup on February 1, which suddenly twisted Myanmar’s transition to democracy.

She was originally accused of illegally importing six walkie-talkie radios. Later, an accusation was made of violating a natural disaster law by violating the coronavirus protocol.

On Monday, a fee was added under a section of the colonial penal code that prohibits the publication of information that could “cause fear or anxiety” or disturb “public calm,” Min Min Soe said.

The trial comes a day after security forces opened fire on unarmed protesters in four cities, and the UN said they had credible information that at least 18 people had died.

A man among a group of protesters crouched behind garbage cans and other makeshift shields in Yangon, the commercial capital, was shot and had to be pulled away by others, according to videos filmed by AFP.

“We strongly condemn the escalating violence against protests in Myanmar and call on the military to immediately stop the use of force against peaceful protesters,” said Ravina Shamdasani, a spokeswoman for the UN Human Rights Office.

The UN rapporteur for Myanmar calls for an arms embargo, sanctions over military coups

AFP independently confirmed eight deaths in Sunday’s violence, although there were fears that tolls could be much higher.

The Assistance Association for Political Prisoners, a trusted monitoring group, estimated that about 30 people have been killed by security forces since the coup.

The military has justified its takeover and ended a decade-long democratic experiment by making unfounded allegations of widespread fraud in November’s national elections.

Suu Kyi’s National League for Democracy won the election in a landslide.

Western powers have repeatedly condemned the generals and imposed sanctions, but the military has responded to the growing pressure at home and abroad by escalating its use of force.

Hundreds of thousands of people have taken to the streets regularly over the past month to oppose the coup.

While the military has steadily increased the kind of force used to try to stop the uprising, with tear gas and water cannons, the weekend’s violence was the biggest escalation.

Protesters come out more and more ‘

Three men were killed and at least 20 others injured when security forces moved on a demonstration in the southern coastal network of Dawei.

Local rescue worker Pyae Zaw Hein said the trio was “shot dead with live rounds”, while the injured were hit by rubber bullets.

But on Monday morning, protesters took to the streets of Dawei again.

Over the weekend, hundreds of people were arrested, including many in Yangon, who were taken to Insein Prison, where many of Myanmar’s leading democracy campaigns have served long prison terms under previous dictatorships.

At least one journalist documenting Sunday’s abuse of security forces was beaten and imprisoned further north in Myitkyina, a waterfront town on the Irrawaddy River, according to local outlet The 74 Media.

Another reporter was shot with rubber bullets when he covered a protest in the central city of Pyay, their employer said.

The United States has been one of the most outspoken critics of the junta and Foreign Minister Antony Blinken reacted again with terror after Sunday’s violence.

“We condemn the abominable violence of the Burmese security forces against the people of Burma and will continue to promote accountability to those responsible,” Blinken tweeted, using the country’s old name.