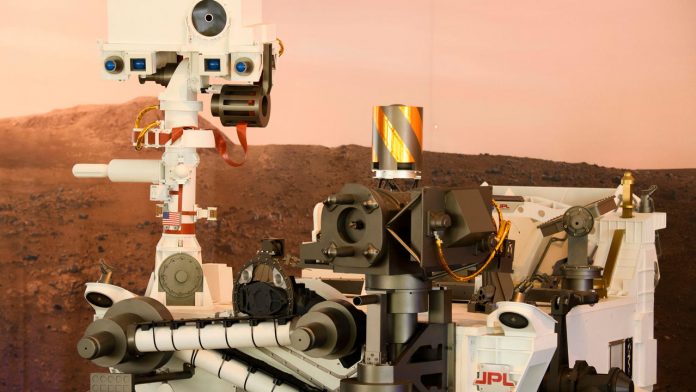 NASA’s science rover Perseverance, the most advanced astrobiology laboratory ever sent to another world, strode through the Martian atmosphere on Thursday and landed safely on the floor in a huge crater, its first stop in search of traces of ancient microbial life on the Red Planet. . .

Heads of mission at NASA’s Jet Propulsion Laboratory near Los Angeles broke into applause and cheers as radio signals confirmed that the six-wheeled rover had survived its dangerous descent and arrived within its target zone inside the Jezero Crater, the site of a missing Martian lake bed.

The robotic vehicle sailed through space for nearly seven months and covered 473 million miles (472 million km) before penetrating the Martian atmosphere at 12,000 miles per hour (19,000 km per hour) to begin its approach to touching the planet’s surface.

The spaceship’s autonomous descent and landing during a complex series of maneuvers that NASA called “the seven minutes of terror” stands as the most detailed and challenging achievement in the annals of the robot’s space flight.

“This is truly the beginning of a new era,” NASA’s Deputy Director of Science, Thomas Zurbuchen, said earlier in the day during NASA’s webcast of the event.

The landing represented the most risky part of two years, $ 2.7 billion, whose primary goal is to search for possible fossil signs of microbes that may have flourished on Mars about 3 billion years ago, when the fourth planet from the sun was warmer. wetter and potentially hospitable for life.

Scientists hope to find biosignatures embedded in samples of ancient sediments that endurance is designed to extract from marsh rocks for future analysis back on Earth – the first specimens ever collected by humans from another planet.

Two subsequent Mars missions are planned to collect the samples and return them to NASA over the next decade. Thursday’s landing came as a triumph for a pandemic-ridden United States in the grip of economic shift caused by the COVID-19 public health crisis.