Home NEWS Nearly a dozen died in Guinea when the violence after the election...
Facebook
Twitter
WhatsApp
Linkedin
LINE 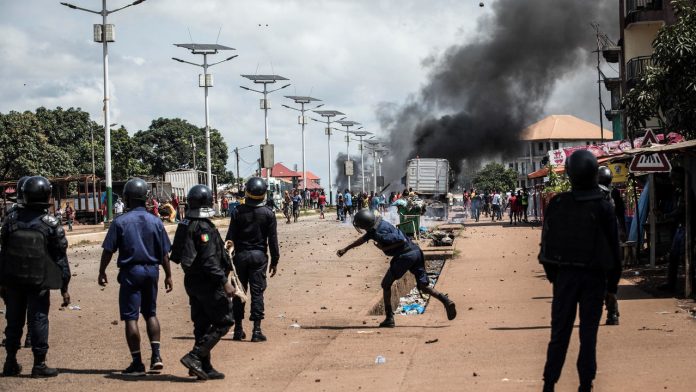 In a statement, the ministry pointed to shots and stab wounds in Guinea’s capital Conakry and elsewhere in the country since Sunday’s presidential vote.

The ministry said in a statement that “this chaos strategy [was] orchestrated to jeopardize the October 18 election, “and also pointed to several people injured in the riots.

“I reiterate my appeal to all for peace and quiet, pending the outcome of the electoral process under way in our country,” President Condé said in a statement. “If the victory is mine, I will remain open to dialogue and available to work with all Guineans.”

Clashes were raging in Conakry on Wednesday, when a security officer, Mamadou Keganan Doumbouya, told AFP that at least three people had been killed.

Many others were injured when supporters of Condé’s main rival Cellou Dalein Diallo set piles of old furniture and burned tires in some opposition neighborhoods in Conakry, Security Minister Damantang Albert Camara said.

Hadjiratou Barry, a resident of a Conakary district where clashes took place, also told AFP – through tears – that her brother had been shot dead.

And a local doctor who refused to be named said he had received two dead bodies and nine wounded at his clinic.

The unrest follows a senior presidential election on Sunday, in which Condé ran for a third term in a controversial bid that had already sparked mass protests in the West African country.

At least 13 people are reported to have been killed in violence since the election, in which Diallo claimed victory on Monday based on his campaign speeches. It exacerbated the already tense mood after the election, as the official results have not yet been announced – they are expected this week.

Opponents of the opposition are deeply suspicious of the fairness of the vote, although the government insists it was fair.

Much of the tension in Guinea is about Condé’s candidacy, and security forces suppressed mass protests against the October movement last year, killing dozens of people.

In March, the 82-year-old president pushed through a new constitution that he claimed would modernize the country. However, it allowed him to circumvent a two-term limit for presidents.

Clashes and barricades after a quiet polling day

Ten candidates run as president alongside front-runners Condé and Diallo, old political rivals who traded barbs in a bitter campaign.

Despite fears of violence following the clashes before the vote, the day of the vote was mostly calm.

Then Diallo’s self-proclaimed election victory created tensions, and the celebration of his supporters plunged into violent clashes with security forces on Monday. The opposition politician said security forces killed three youths that night, although AFP was unable to confirm the details.

Monitors from the African Union and West African bloc 15 countries ECOWAS both said Guinea’s election was mostly fair, despite insistence from Diallo’s camp that it was fake.

Formerly an opposition activist, Condé became Guinea’s first democratically elected president in 2010 and was re-elected in 2015. But rights groups accuse him of turning to authoritarianism, saying he tends to be angry and reluctant to hold his security forces accountable. .