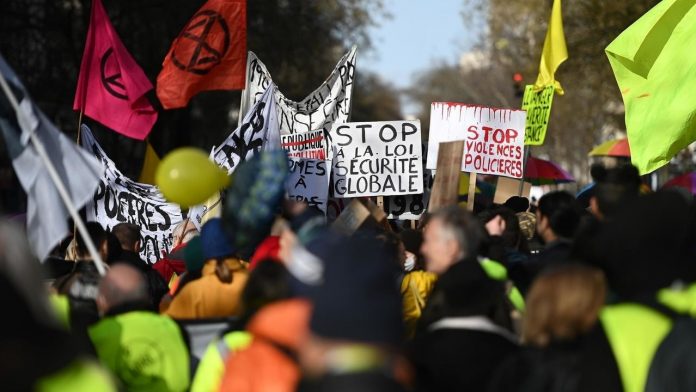 New protests were held on Saturday against a French security bill that critics say will restrict the recording of police and publish photos on social media, especially to document cases of police brutality.

A wide cross-section of protesters showed up in dozens of French cities, including activists from the anti-government movement “Yellow West” and others who called for the protection of the cultural sector.

“I have two reasons to come today – the overall security law and also to support the culture,” said Kim, a 24-year-old civil engineer.

“Many shops are open, the subway is full, but cultural sites are closed, although we can apply protection measures” against coronavirus, she said.

Among the protesters were also young people who called for the right to hold rave parties as one in Brittany that attracted 2400 at the beginning of the year.

Protesters are protesting against draft legislation that would ban filming, which President Emmanuel Macron’s ruling LREM party has said it would write about.

But people are also protesting the use of surveillance tools such as drones and pedestrian cameras.

Pictures of white police beating an unarmed black music producer in his studio in Paris on November 21 have fueled anger over the legislation, condemned by many signaling a turn to the right by Macron.

The number of protesters who showed up on Saturday was limited by bad weather and Covid-19 restrictions.

France has registered 75,000 deaths due to coronavirus since the outbreak began and the country is making an extra possible lock-in.

In Paris, the large Place de la République was half full, AFP journalists reported, while about 3,000 people had gathered in Montpellier, southern France.

Hundreds met for similar meetings in other cities.

The government claims that the proposed law is needed because police have become targets of attacks and demand violence against them on social media.

But French media say a “new national law enforcement plan” is being used to limit media coverage of demonstrations.

The proposed security law, which has already been approved by the National Assembly, will be reviewed by the Senate, France’s upper house of parliament, in March.